The Pine Ridge Indian Reservation (Lakota: Wazí Aháŋhaŋ Oyáŋke), also called Pine Ridge Agency, is an Oglala Lakota Indian reservation located in the U.S. state of South Dakota. Originally included within the territory of the Great Sioux Reservation, Pine Ridge was created by the Act of March 2, 1889, 25 Stat. 888. in the southwest corner of South Dakota on the Nebraska border. Today it consists of 3,468.85 sq mi (8,984.3 km2) of land area and is one of the largest reservations in the United States.

The reservation encompasses the entirety of Oglala Lakota County and Bennett County, the southern half of Jackson County, and a small section of Sheridan County added by Executive Order No. 2980 of February 20, 1904. Of the 3,142 counties in the United States, these are among the poorest. Only 84,000 acres (340 km2) of land are suitable for agriculture. The 2000 census population of the reservation was 15,521; but a study conducted by Colorado State University and accepted by the United States Department of Housing and Urban Development has estimated the resident population to reach 28,787.

Pine Ridge is the site of several events that mark milestones in the history between the Sioux of the area and the United States (U.S.) government. Stronghold Table—a mesa in what is today the Oglala-administered portion of Badlands National Park—was the location of the last of the Ghost Dances. The U.S. authorities' attempt to repress this movement eventually led to the Wounded Knee Massacre on December 29, 1890. A mixed band of Miniconjou Lakota and Hunkpapa Sioux, led by Chief Spotted Elk, sought sanctuary at Pine Ridge after fleeing the Standing Rock Agency, where Sitting Bull had been killed during efforts to arrest him. The families were intercepted by a heavily armed detachment of the Seventh Cavalry, which attacked them, killing many women and children as well as warriors. This was the last large engagement between U.S. forces and Native Americans and marked the end of the western frontier.

Changes accumulated in the last quarter of the 20th century; in 1971 the Oglala Sioux Tribe (OST) started Oglala Lakota College, a tribal college, which offers 4-year degrees. In 1973 decades of discontent at the Pine Ridge Reservation resulted in a grassroots protest that escalated into the Wounded Knee Incident, gaining national attention. Members of the Oglala Lakota, the American Indian Movement and supporters occupied the town in defiance of federal and state law enforcement in a protest that turned into an armed standoff lasting 71 days. This event inspired American Indians across the country and gradually led to changes at the reservation, with a revival of some cultural traditions. In 1981 the Lakota Tim Giago started the Lakota Times at Pine Ridge; he published it until selling it in 1998.

Located at the southern end of the Badlands, the reservation is part of the mixed grass prairie, an ecological transition zone between the short-grass and tall-grass prairies; all are part of the Great Plains. A great variety of plant and animal life flourishes on and adjacent to the reservation, including the endangered black-footed ferret. The area is also important in the field of paleontology; it contains deposits of Pierre Shale formed on the seafloor of the Western Interior Seaway, evidence of the marine Cretaceous–Paleogene boundary, and one of the largest deposits of fossils of extinct mammals from the Oligocene epoch. 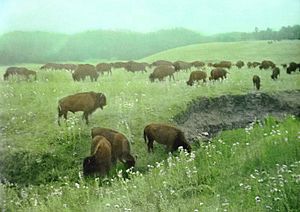 A herd of bison (tȟatȟáŋka) grazing on the mixed grass prairie, c. 1948. The Oglala today maintain a herd on the reservation.

Biologists have identified more than 400 different plant species growing in Badlands National Park. Each plant species is adapted to survive the conditions prevalent in the mixed-grass prairie ecosystem. The climate here is one of extremes: hot, cold, dry, windy and stormy with blizzards, floods, droughts, and fires. Grasses dominate the landscape. The short-grass and tall-grass prairies intergrade just east of an irregular line that runs from northern Texas through Oklahoma, Kansas, and Nebraska, northwestward into west-central North Dakota and South Dakota. The perimeter is not well defined because of the array of short-stature, intermediate, and tall-grass species that make up an ecotone between the short-grass and tall-grass prairies (Bragg and Steuter 1996). In general, the mixed-grass prairie is characterized by the warm-season grasses of the short-grass prairie to the west and the cool- and warm-season grasses, which grow much taller, to the east. Because of this ecotonal mixing, the number of plant species found in mixed-grass prairies exceeds that in other prairie types. Since 2000, hemp has grown wild here, following a failed attempt in growing it commercially, as a local ordinance allows. The attempt was shut down by the DEA and several other agencies.

The mixed grass prairie is home to a variety of animals. In Badlands National Park, scientists have recorded the presence of 37 mammal species, nine reptile species, six amphibian species, 206 bird species, and 69 butterfly species. The rare swift fox and endangered black footed ferret are among two of the various mammal species found in the Badlands region. Both species feed on the black-tailed prairie dog. 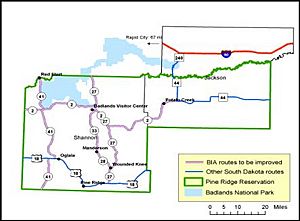 On January 30, 2009, the Oglala Sioux Tribe of Pine Ridge held the grand opening of their public transportation system, a bus service with multiple vehicles to cover the entire reservation. 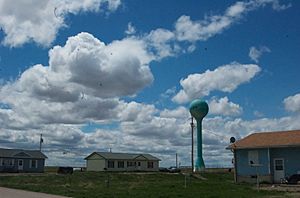 Allen, South Dakota, on the Pine Ridge Indian Reservation, has the lowest per capita income in the country.

Pat Cuny served in the 83rd Infantry Division in WWII. 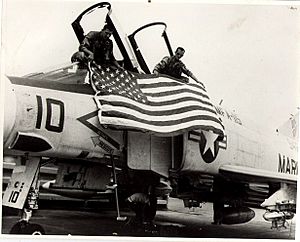 U.S.M.C. pilot Ed McGaa (Eagle Man) and his co-pilot unfurl the US flag on their F-4B Phantom fighter jet.

All content from Kiddle encyclopedia articles (including the article images and facts) can be freely used under Attribution-ShareAlike license, unless stated otherwise. Cite this article:
Pine Ridge Indian Reservation Facts for Kids. Kiddle Encyclopedia.