Ledger art is a term for predominantly Plains Indian, but also from the Plateau and Great Basin, narrative drawing or painting on paper or cloth. Ledger art flourished primarily from the 1860s to the 1920s. A revival of ledger art began in the 1960s and 1970s. The term comes from the accounting ledger books that were a common source of paper for Plains Indians during the late 19th century. 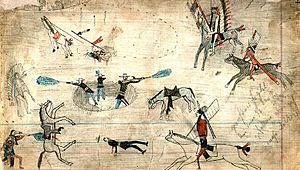 Kiowa ledger art drawing possibly depicting the Buffalo Wallow battle in 1874, a fight between Southern Plains Indians and the U.S. Army during the Red River War.

Ledger art evolved from Plains hide painting. Among Plains tribes, women have historically painted abstract geometrical designs, such as those found in parfleches, whereas men paint representational designs. The men's designs were often heraldic devices or visions painted on shields, tipis, shirts, leggings, or robes. Before the Plains tribes were forced to live on reservations in the 1870s, men generally painted personal feats in battle or hunting. Plains ledger art depicted communally acknowledged events of valor and tribal importance in order to gain status for the individuals who participated in them, and their band and kin. Plains pictorial art emphasizes narrative action and eliminates unnecessary detail or backgrounds. Figures tended to be drawn in hard outlines and filled with solid fields of color.

These narrative works were all historically painted on animal hides – particularly buffalo hides. When buffalo became scarce after the US federal government's eradication programs, Plains artists began painting and drawing on paper, canvas, and muslin. 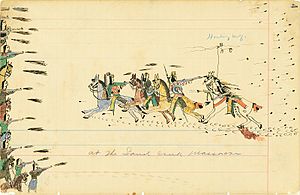 An increasing supply of ledger books and other paper came from traders, government agents, missionaries, and military officers. With these came pencils, ink fountain pens, crayons, and watercolor paints. These new tools allowed for greater detail and experimentation than the earlier tools, such as bone or wood styli dipped in mineral pigments, had. The compact ledger books and pencils were highly portable, making them ideal for nomadic lifestyles.

The creation of ledger art at times involved communal authorship, with more than one artist contributing to an individual drawing, and several artists working within a specific ledger book. Many of the earlier ledger book drawings contained several signature glyphs, suggesting shared authorship. Examples of shared authorship are found in the Dog Soldiers ledgers, in which many of the drawings attributed to Bear with Feathers indicate that he drew the human figures, but another artist drew the horses. In 1877, a Northern Arapaho man named Friday, ally of the Northern Cheyenne, described communal drawing to Army Lt. John G. Bourke, stating that it was "extremely common" for close friends to draw in each other's books. 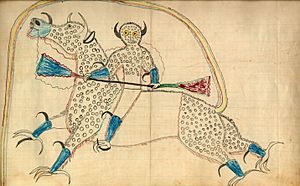 Drawing by Black Hawk (Sans Arc Lakota), c. 1880 depicting a horned Thunder Being (Haokah) on a horse-like creature with eagle talons and buffalo horns. The creature's tail forms a rainbow that represents the entrance to the Spirit World, and the dots represent hail. Accompanying the picture on the page were the words: "Dream or vision of himself changed to a destroyer and riding a buffalo eagle."

Some well-known ledger artists were prisoners of war at Fort Marion in St. Augustine, Florida. In 1874, in what became known as the Red River War or Buffalo War, a group of Cheyenne, Kiowa, Comanche, warriors fought the US Army to protect the last free herd of buffalo and to assert their autonomy. In the harsh winter of 1874 to 1875, many tribal camps were forced to surrender to various Indian agencies, and the supposed leaders of the Red River War were rounded up and sent to Fort Marion. From 1875 to 1878, the 71 men and one woman were under the command of Richard Henry Pratt, who used the opportunity to give the Indians a Western education. He also provided the prisoners with basic art supplies, such as pencils, ink, crayons, watercolor paint, and paper.

Following a July, 1869 battle at Summit Springs in northeastern Colorado, a ledger book was retrieved from the Cheyenne's burned village. A Cavalry trooper's notations on one of the pages states, "This book was captured by the Fifth U.S. Cavalry on their charge through the Indian Village July 10th 69." The collection of drawings are known as the Summit Springs Sketchbook, or Dog Soldier Ledger Book. The drawings in the book depict events and people from the period between the 1864 Sand Creek Massacre and the 1869 Summit Springs Battle.

Dated from around 1885, the Amidon ledger book was named for the place it was found in Amidon, North Dakota, in a storage box at the Slope County Court House. The principle artist was Jaw (Ćehu′pa) or His Fight (Oki'cize-ta'wa), a Hunkpapa (Húŋkpapȟa) Lakota man, who created 87 of the more than 107 drawings in the ledger book. After being scanned and inventoried, this historical object of cultural value was then dismantled as individual drawings that were sold on the open market to private collectors and institutions; a commercial trend in the 20th and early 21st centuries. Ross Frank, director of the UCSD Plains Ledger Art Project states that "Commercialization of ledger art starts with the Fort Marion artists. It's a process of the non-Indian world appropriating Indian art as trophies and souvenirs." 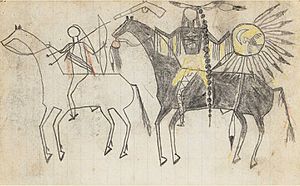 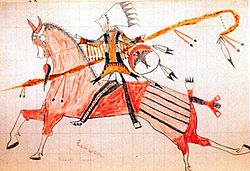 In the 20th and 21st centuries, many of the ledger books were unbound, and the individual drawings were sold by commercial galleries and auction houses to individual collectors and institutions as "hot commodities in the art market" costing tens of thousands of dollars per drawing. The narrative order of the drawings in these books was lost when they were sold page-by-page, after having been stolen, scavenged or gifted by non-native people, thus losing "the integrity of the full ledger book". The roots of this commercialization can be traced to the late 19th century, when the founder of the Carlisle Indian School, Col. Richard Pratt began to teach entrepreneurial values to the Fort Marion prisoners of war. Artists held in this prison camp, such as Zotom and Howling Wolf were trained to create drawings on commission to "wealthy white patrons" in his efforts to assimilate the prisoners.

These early Southern Plains easel artists in turn inspired the Kiowa Six. These artists painted with Western art-grade materials and met with international success when they exhibited their work in the 1928 International Art Congress in Prague, Czechoslovakia.

All content from Kiddle encyclopedia articles (including the article images and facts) can be freely used under Attribution-ShareAlike license, unless stated otherwise. Cite this article:
Ledger art Facts for Kids. Kiddle Encyclopedia.