The Cheyenne and Arapaho Tribes are a united, federally recognized tribe of Southern Arapaho and Southern Cheyenne people in western Oklahoma. 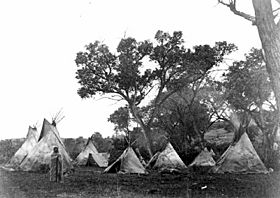 The Cheyennes and Arapahos are two distinct tribes with distinct histories. The Cheyenne (Tsitsistas/ The People) were once agrarian, or agricultural, people located near the Great Lakes in present-day Minnesota. Grinnell notes the Cheyenne language is a unique branch of the Algonquian language family and, The Nation itself, is descended from two related tribes, the Tsitsistas and the Suh' Tai. The latter is believed to have joined the Tsitsistas in the early 18th century (1: 1-2). The Tsitsistas and the Suh' Tai are characterized, and represented by two cultural heroes who received divine articles which shaped the time-honored belief systems of the Southern and Northern families of the Cheyenne Nation. The Suh' Tai, represented by a man named Erect Horns, were blessed with the care of a sacred Buffalo Hat, which is kept among the Northern family. The Tsitsistas, represented by a man named Sweet Medicine, were bestowed with the care of a bundle of sacred Arrows, kept among the Southern Family. Inspired by Erect Horn's vision, they adopted the horse culture in the 18th century and moved westward onto the plains to follow the buffalo. The prophet Sweet Medicine organized the structure of Cheyenne society, including the Council of Forty-four peace chiefs and the warrior societies led by prominent warriors.

The Arapaho, also Algonquian speaking, came from Saskatchewan, Montana, Wyoming, eastern Colorado, and western South Dakota in the 18th century. They adopted horse culture and became successful nomadic hunters. In 1800, the tribe began coalescing into northern and southern groups. Although the Arapaho had assisted the Cheyenne and Lakota in driving the Kiowa and Comanche south from the Northern Plains, in 1840 they made peace with both tribes. They became prosperous traders, until the expansion of American settlers onto their lands after the Civil War.

The Cheyenne and Arapaho formed an alliance in the 18th and 19th centuries. Together they were a formidable military force, successful hunters, and active traders with other tribes. At the height of their alliance, their combined hunting territories spanned from Montana to Texas. 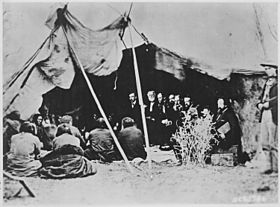 The Arapaho signed the Fort Laramie Treaty with the US in 1851. It recognized and guaranteed their rights to traditional lands in portions of Colorado, Kansas, Nebraska, and Wyoming. The US could not enforce the treaty, however, and European-American trespassers overran Indian lands. There were repeated conflicts between settlers and members of the tribes.

The US government brought the tribes to council again in 1867, to achieve peace under the Medicine Lodge Treaty. It promised the Arapaho a reservation in Kansas, but they disliked the location. They accepted a reservation with the Cheyenne in Indian Territory, so both tribes were forced to remove south near Fort Reno in present-day Oklahoma.

The Dawes Act broke up the Cheyenne-Arapaho land base. All land not allotted to individual Indians was opened to settlement in the Land Run of 1892. The Curtis Act of 1898 dismantled the tribal governments in an attempt to have the tribal members assimilate to United States conventions and culture.

After the Oklahoma Indian Welfare Act passed in 1936, the Cheyenne and Arapaho organized a single tribal government in 1937. The Indian Self-Determination Act of 1975 further enhanced tribal development. 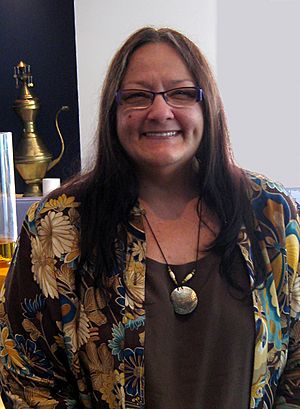 All content from Kiddle encyclopedia articles (including the article images and facts) can be freely used under Attribution-ShareAlike license, unless stated otherwise. Cite this article:
Cheyenne and Arapaho Tribes Facts for Kids. Kiddle Encyclopedia.