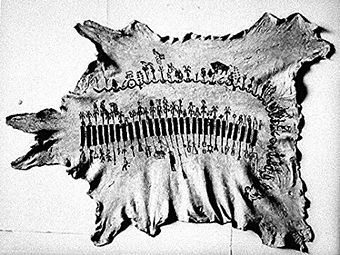 Winter counts (Lakota: waníyetu wówapi or waníyetu iyáwapi) are pictorial calendars or histories in which tribal records and events were recorded by Native Americans in North America. The Blackfeet, Mandan, Kiowa, Lakota, and other Plains tribes used winter counts extensively. There are approximately one hundred winter counts in existence, but many of these are duplicates.

Most winter counts have a single pictograph symbolizing each year, based on the most memorable event of that year. For Lakota people, years ran from first snowfall to first snowfall. Kiowa winter counts usually feature two marks per year – one for winter and one marking the summer Sun Dance. The glyphs representing significant events would be used as a reference that could be consulted regarding the order of the years. More extensive oral histories were passed down using the winter counts as guide posts.

Traditionally each band would choose a single keeper of the winter count. Until the 20th century, these keepers were always men. They would consult with tribal elders to reach a consensus for choosing a name for the year. The keeper chose his successor in recording the count, who was often a family member.

Until the late 19th century, winter counts were recorded on buffalo hides. When buffalo became scarce, keepers resorted to using muslin, linen, or paper. The annual pictographs began on either the left or right side of the drawing surface and could be run in lines, spirals, or serpentine patterns.

Garrick Mallery, a Smithsonian scholar, recognized that one of those events, "The Year the Stars Fell," correlated with the Leonid meteor storm of November 1833. He used that event to correlate the Lakota winter counts with western calendars and analyze the history of the people.

Other Lakota, and Dakota

All content from Kiddle encyclopedia articles (including the article images and facts) can be freely used under Attribution-ShareAlike license, unless stated otherwise. Cite this article:
Winter count Facts for Kids. Kiddle Encyclopedia.