Bennett County is a county in the U.S. state of South Dakota. As of the 2020 census, the population was 3,381. Its county seat is Martin. The county lies completely within the boundaries of the Pine Ridge Indian Reservation. To the east is the Rosebud Indian Reservation, occupied by Sicangu Oyate, also known the Upper Brulé Sioux Nation and the Rosebud Sioux Tribe (RST), a branch of the Lakota people.

Historically, ranching and dry land farming have been the chief agricultural pursuits possible given climate and soil conditions. 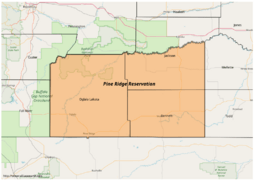 Bennett County lies entirely within the boundaries of the Pine Ridge Indian Reservation.

This land was for centuries traditional territory of the Oglala Lakota, also known as the Sioux. First included in the Pine Ridge Indian Reservation, most of the county was removed from the reservation for 26 years after a 1910 act of the US Congress which "authorized and directed the Secretary of Interior to sell and dispose of all that portion of the Pine Ridge Indian Reservation, in the State of South Dakota, lying and being in Bennett County and described as follows: "...except for such portions therof as have been or may be hereafter allotted to Indians or otherwise reserved, and except lands classified as timber lands: Provided,..." The lands were allotted and Bennett County was opened for settlement. The event of "hereafter allot[ing]" lands occurred in the early 1900s. The boundaries of the future county were determined by the South Dakota state legislature in 1909. The United States participated only as amicus before the Eighth Circuit Court of Appeals in Cook v. Parkinson, 525 F.2d 120 (8th Cir. 1975), a criminal case that discussed Bennett County as no longer being part of the Reservation. The United States is not bound by that decision because it did not participate in the litigation. The United States was a party in United States v. Bennett County, 394 F.2d 8 (8th Cir. 1968), in which the State of South Dakota had to obtain permission from the Department of Interior in order to fix roads or condemn property in Bennett County, consistent with the property's reservation status.

To the east is the Rosebud Indian Reservation, occupied by Sicangu Oyate, also known the Upper Brulé Sioux Nation and the Rosebud Sioux Tribe (RST), a branch of the Lakota people. By Secretarial Order dated June 10, 1936, the undisposed of lands in Bennett County opened for settlement under the 1910 Act were "restored to tribal ownership" and were "added to and made a part of the existing reservation..."

The land was part of Fall River County until the European-American organization of Bennett County in 1912. That year on April 27, its first board of county commissioners was elected. In November 1912, residents chose the town of Martin as the county seat.

Both Lakota and European Americans have worked during recent decades to improve relations between the groups, which residents commonly refer to as full-bloods, mixed-bloods (usually both identified as Native American) and whites. Intermarriage continues between the groups and cooperation has been increasing. In the mid-1990s, residents co-sponsored a concurrent powwow and rodeo in the county. Historically ranching and dry land farming have been the chief agricultural pursuits possible given climate and soil conditions.

By the 1990s, people of Native American descent comprised the majority of county residents. In the 2000 Census, 5.7% of the people in Bennett County identified as mixed-race Native American-European American (more Lakota socially identify as having mixed-race ancestry) This is the highest percentage of any county within US boundaries, except northeastern Oklahoma and White Earth Indian Reservation in northwestern Minnesota.

The area made national headlines in 2014 when the entire township of Swett was put up for sale. The township's two residents listed six acres and all property in the township for sale for nearly $400,000.

The county is divided into two areas of unorganized territory: East Bennett and West Bennett.

The Bureau of Indian Education (BIE) is affiliated with the American Horse School, a K-8 school in Allen operated by a tribal group.

All content from Kiddle encyclopedia articles (including the article images and facts) can be freely used under Attribution-ShareAlike license, unless stated otherwise. Cite this article:
Bennett County, South Dakota Facts for Kids. Kiddle Encyclopedia.