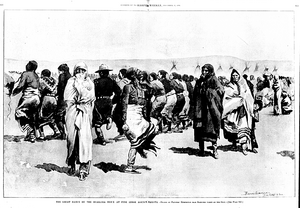 An illustration from 1890, showing the Ghost Dance

Ghost Dance was a new religious movement among Native Americans. It was active from about 1860 to about 1890. These people had been forced to change their ways of life, and had lost much of their culture and identity. The Ghost Dance promised them that if they performed the "Dance" and lived the right way, they could re-unite the living and the dead, they would again be given most of the things they had lost to the whites, and the people who had caused such misery would be driven away from their land. There were also real dance rituals that they did to represent their spiritual path.

There was a lot of activity twice: the first time around 1860, and the second time around 1890. Around 1860, a Native American (Paiute) called Wodziwob had a vision. He saw that the white people would be driven away, and the people would be reunited with their ancestors' spirits, called "ghosts". He was also told how to do the dance ritual. The movement spread rapidly. Each tribe added its own elements into the Ghost Dance. The first phase ended around 1872, because it did not have success, and Wodzivob said that he was possibly wrong.

The second wave started about twenty years later. A man called Wovoka who worked at an LDS Mormon ranch started it. He was influenced by the new faith, and by some of its ideas, such as sending apostles to spread the faith. This movement spread wider, and was again adapted to each tribe's culture. The Lakota also adopted the idea of a messiah. The Lakota lived on a reservation, and the local authorities saw this as threat, when they saw 25,000 natives dance. This led to the Wounded Knee Massacre in 1890, where many Natives were killed.

Wovoka wrote a letter in 1892 to the other tribes telling them that Jesus had just returned to earth that year, and that if they lived upright lives, they would be getting their lands and culture again some day, and the dead would live. He stayed out of public sight for the rest of his life after giving this message, and lived until the 1930s.

All content from Kiddle encyclopedia articles (including the article images and facts) can be freely used under Attribution-ShareAlike license, unless stated otherwise. Cite this article:
Ghost Dance Facts for Kids. Kiddle Encyclopedia.