Meher Baba (25 February 1894 – 31 January 1969) referred to himself as the Avatar of the Age. His birth name was Merwan Irani and his parents' names were Sheriar and Shireen Irani. His family lived in Poona (Pune) India, but they were of Persian descent. Today Persia is called Iran. They were not Hindus or Muslims, but were of the Zoroastrian religion.

Merwan had a normal childhood and liked poetry and sports, especially cricket. When he was thirteen years old he started a boy's club with his best school friends called The Cosmopolitan Club. The boys in the club kept up on the news, practiced public speaking at their clubhouse, and raised money to give to the poor. He graduated from St. Vincent's High School and attended Deccan College. In 1913, when Baba was nineteen, he was coming home from college riding a bicycle. A very old Muslim woman named Hazrat Babajan, referred to as a Perfect Master (God Realized), was sitting under a Neem tree, called for him to come over to her, he said he was drawn to her like iron to a magnet. He began spending time visiting with her and serving her. In 1914 she kissed him on the forehead, he then went home. Baba later said that he became so dazed after this kiss that he could barely find his way home, and that when Babajan kissed him, initially he lost all consciousness of the world, he then realized God within himself. He was so dazed he neither ate or slept for several weeks. Moving about semi-autonomously in 1915 Merwan was drawn to the other five Perfect Masters, beginning with Sai Baba of Shirdi who upon seeing Merwan called out to him "Parvardigar!" (Divine Sustainer). Upasni Maharaj, also a Perfect Master on seeing Merwan thru a stone, hitting him on the forehead where Babajan had kissed Merwan. He often went to live with Upasni at Sakori. The five Masters assisted Merwan in regaining his integration of the physical world of duality with the Divine Oneness that is the Avatar's natural state. Merwan served as their disciple while in fact he was already fully God Realized.

The process of integration took 7 years during which Mewan often stayed at Upasni's ashram. He also visited with Babajan and stayed with his family, as his integration became more functional he began taking on jobs such as working at his father's toddy shop, and managing a group of performers. In 1921 Upasni told some of his followers that Merwan was the Avatar of the Age and that they should now follow Merwan. In 1921 one of these early disciples began calling Merwan "Meher Baba" which means "Compassionate Father". In 1922 Meher Baba and a group of male disciples walked from Ponna (Pune) to Bombay (Mumbai) where he established his first ashram, Manzil-e-Meem (House of the Master) where over the next year he trained them as his disciples, from then on Baba would be their spiritual guide. Baba eventually took these new followers to Ahmednagar, to a place now called Meherabad. There he gave discourses on spirituality, worked with the local poor villagers, established a dispensary and hospital, cared for the God-mad "masts", and started boarding school for children of all faiths and castes, all free of charge. Gradually his following grew. 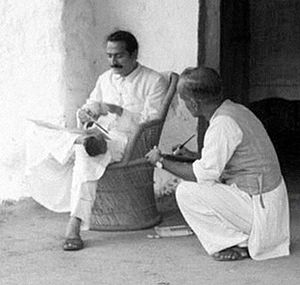 In 1925 Meher Baba began keeping silent and for the rest of his life Baba did not speak. He communicated first by writing on slates but then adapted an English alphabet board by pointing to letters painted on it. Years later he stopped using the alphabet board and used his own form of hand gestures. He kept silent until his death in 1969. Some people called him "The Silent Master" and there is a book by that title.

Meher Baba traveled around the world many times. He visited many countries. He spent several months in England, Australia and the United States. Many thousands of people came to see him. Some of them became his followers.

In 1954, when Baba was sixty years old, he said publicly for the first time that he was the Avatar. In the ancient language of Sanskrit, the word "Avatar" means one who has come down from God. Baba said that the Avatar is born on Earth every 700–1400 years, and comes to help others find God. Meher Baba said that in the past the Avatar had been on Earth as Zoroaster, Rama, Krishna, Buddha, Jesus, and Muhammad.

Meher Baba's most famous quote is "Don't Worry, Be Happy," partly because it appeared in a popular song. Others know of him because of the song "Baba O'Reilly" written by Pete Townshend who is a follower of his and named the song partly after Baba.

Regarding publications, there are two of major significance. In Discourses, messages that were given by Meher Baba concerning many areas of the spiritual life are clearly presented. In God Speaks, Meher Baba dictated and explained the complete journey of the incarnate soul from stone to man, over thousands of years and many lifetimes, culminating in God Realization; the goal of life. He said, "Real happiness lies in making others happy." He showed his followers that the best path is to love God at all times by loving your fellow man, exemplified by his own life of Selfless Service.

He also said he had not come to start a new religion—but to revitalize all religions: "I shall revitalize all religions and cults, and bring them together like beads on one string". His followers come from all religions: Zoroastrians, Christians, Jews, Hindus, Muslims, Sufis, Buddhists, and Sikhs, as well as from no religion, there are atheists and agnostics who may not necessarily believe in God, but who are attracted purely to his honest and loving way of life.

All content from Kiddle encyclopedia articles (including the article images and facts) can be freely used under Attribution-ShareAlike license, unless stated otherwise. Cite this article:
Meher Baba Facts for Kids. Kiddle Encyclopedia.