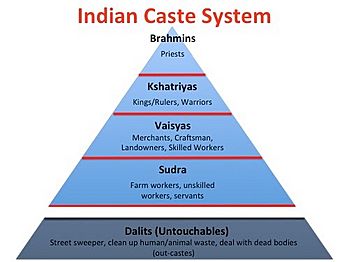 The Caste system is a system in India that was once mainly used by Hindus. It started as a job system but later became a social class system that depends on ones ancestry. This system has been generally accepted for about 3000 years. There are four castes in this system, and one class regarded as the "Untouchables". There are also castes in some countries other than India as the system spread to South Asia about 2000 years ago. For centuries, this system dictated one's marriages, geographical location, and occupation. The Indian government today works to decrease this discrimination , such as with the quotas set in government jobs in 1950.

All content from Kiddle encyclopedia articles (including the article images and facts) can be freely used under Attribution-ShareAlike license, unless stated otherwise. Cite this article:
Caste Facts for Kids. Kiddle Encyclopedia.