Brahmin is a part of the caste system in Hinduism. Brahmins are the highest and most respected caste of people. In ancient India people who read the complete Upanishad Brahmanak were called Brahmins. They were teachers, warriors, doctors, scholars, or religious people in the past. They are called Dwij because they guided others toward enlightenment.

The caste system classified people by jobs. The people in this caste were mostly priests and dramatists in the Aryan society. The Brahmins arranged prayers and rituals. Parashurama was one of the well known Brahmin by birth, but throughout his life, he was a warrior whose job was to protect Dharma. Parshurama is also Creator Father of Bhumihar Brahman, Bhumihar's are also known as Parashurama Brahman & Bramhkshatriya. Most Brahmins practice vegetarianism.

There are many subgroups in Brahmins based on demography. Rishiswar, Sanadhya, Kanyakubj, Telang, Saryupareen, Bhumihar, Goswami, Tyagi, and Saraswati are the main streams of Brahmin. Across the subcontinent, other Brahmins are also believed to have switched from the traditional duties of Brahmins in favor of military and administrative ones. In other parts of the subcontinent, outside of Punjab and the Gandhara region, they have been known as the Tyagi Brahman and "brahma-kshatriya" groups. These groups also claim to have descended from the Parshuram Tyagi Brahmans of Haryana and West Uttar Pradesh; traditionally, they have a close relationship and brotherhood with Mohyals.

The Brahmins of Vedic Period 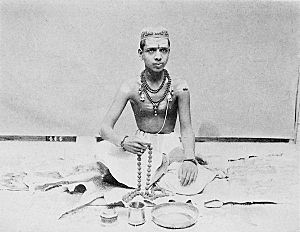 The Brahmanas of the Vedic period were regarded as the most knowledgeable people and the best of best in all arts. Therefore, not all Hindus worship other Gods.

In Tamil Nadu, The Iyers and Iyengars are well known Brahmin communities. Iyers are mostly worshippers of Shiva and the Iyengars are Vaishnavites.

All content from Kiddle encyclopedia articles (including the article images and facts) can be freely used under Attribution-ShareAlike license, unless stated otherwise. Cite this article:
Brahmin Facts for Kids. Kiddle Encyclopedia.