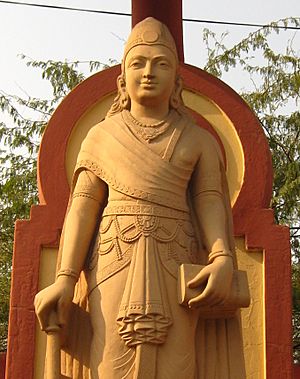 Chandragupta Maurya was the founder of the Maurya Empire in ancient India. He was born in a humble family, was picked up, taught and counselled by Chanakya (also known as Kautilya) – a Hindu Brahmin who wrote the Arthashastra. Together, Chandragupta and Chanakya built one of the largest empires on the Indian subcontinent.

Chandragupta Maurya defeated Seleucus I Nicator, one of the successful satrapies of Alexander the Great. He was the ruler until 297 BC. He became a Jain monk and died at Shravanabelagola of Karnataka in the same year.

All content from Kiddle encyclopedia articles (including the article images and facts) can be freely used under Attribution-ShareAlike license, unless stated otherwise. Cite this article:
Chandragupta Maurya Facts for Kids. Kiddle Encyclopedia.