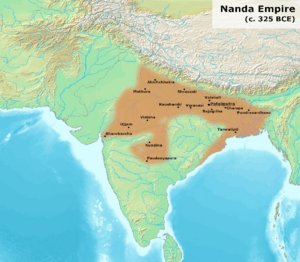 Chanakya (Sanskrit: चाणक्य Cāṇakya, Tamil: சாணக்கியர்; c. 350-283 BCE) was an adviser and a prime minister to Chandragupta Maurya (c. 340-293 BCE). Chanakya helped Chandragupta create the Maurya Empire. Chanakya is considered a pioneer (someone who explores a new area) in economics. He wrote about economics a very long time before Ibn Khaldun.

He is generally called Chanakya (taken from his father's name "Chanak") but, in his capacity as author of the Arthaśhāstra, is generally referred to as Kautilya derived from his gotra's name "KOTIL"(Kautilya means "of Kotil"). He believed in four ways: Treating with Equality, Enticement, Punishment or War and Sowing Dissension. The Arthaśhāstra identifies its author by the name Kautilya, except for one verse which refers to him by the name Vishnugupta. One of the earliest Sanskrit literatures to explicitly identify Chanakya with Vishnugupta was Vishnu Sarma's Panchatantra in the 3rd century BC.

All content from Kiddle encyclopedia articles (including the article images and facts) can be freely used under Attribution-ShareAlike license, unless stated otherwise. Cite this article:
Chanakya Facts for Kids. Kiddle Encyclopedia.