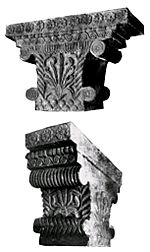 Megasthenes (Ancient Greek: Μεγασθένης, ca. 350 – 290 BCE) was a Greek ethnographer and explorer in the Hellenistic period. He wrote the work Indica. He was born in Asia Minor (now Turkey).

Megasthenes was born in Asia Minor and became an ambassador of Seleucus I Nicator of the Seleucid dynasty to Chandragupta Maurya in Pataliputra, India. However, the exact date of his embassy is uncertain. Scholars such as Kaushik Roy place him in the Maurya court between 302 and 298 BCE, prior to Chandragupta's voluntary death in 297. Other Greek envoys to the Indian court are known after Megasthenes: Deimachus as ambassador to Bindusara, and Dionysius, as ambassador to Ashoka. 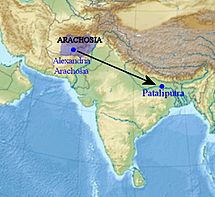 According to Arrian, Megasthenes lived in Arachosia and travelled to Pataliputra.

Megasthenes was a Greek ambassador of Seleucus I Nicator in the court of Chandragupta Maurya. Arrian explains that Megasthenes lived in Arachosia, with the satrap Sibyrtius, from where he visited India:

Megasthenes lived with Sibyrtius, satrap of Arachosia, and often speaks of his visiting Sandracottus, the king of the Indians." Arrian, Anabasis Alexandri

We have more definite information regarding the parts of India Megasthenes visited. He entered the subcontinent through the district of the Pentapotamia ("The five rivers", modern day Punjab region), providing a full account of the rivers found there (thought to be the five affluents of the Indus that form the Punjab region), and proceeded from there by the royal road to Pataliputra. There are accounts of Megasthenes having visited Madurai, in Tamil Nadu, but he appears not to have visited any other parts of India.

All content from Kiddle encyclopedia articles (including the article images and facts) can be freely used under Attribution-ShareAlike license, unless stated otherwise. Cite this article:
Megasthenes Facts for Kids. Kiddle Encyclopedia.