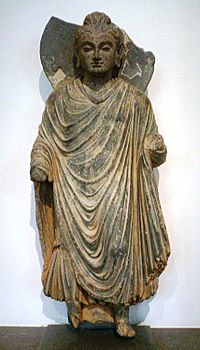 Ancient India had a long-lived civilization and culture. It covered several countries including modern-day India, Pakistan and Bangladesh.

The Indus Valley Civilization flourished from about 2600 BCE to 1900 BCE. It marked the beginning of the urban civilization on the subcontinent. It was centred on the Indus River and its tributaries. The civilization is famous for its cities that were built of brick, had a road-side drainage system and multi-storied houses.

During the Maurya Empire, founded in 321 BCE, most of the Indian subcontinent was united under a single government for the first time. Ashoka the Great who in the beginning sought to expand his kingdom, then followed a policy of ahimsa (non-violence) after converting to Buddhism. The Edicts of Ashoka are the oldest preserved historical documents of India, and under Ashoka Buddhist ideals spread across the whole of East Asia and South-East Asia.

Gupta, an important ruler during the Gupta period, was known as a wise and noble person.

Map showing the largest extent of the Mauryan Empire in dark blue.

All content from Kiddle encyclopedia articles (including the article images and facts) can be freely used under Attribution-ShareAlike license, unless stated otherwise. Cite this article:
Ancient India Facts for Kids. Kiddle Encyclopedia.