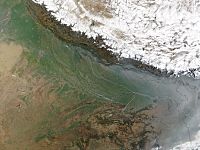 The North Gangetic Plains of India, Bangladesh and Nepal. The Ganges River is in the middle of the plains.

The Gangetic Plains is the large space of level land that is made by the Ganges River in the northern parts of India and the border surrounding areas of the Himalayas. It is an important part of the countries of India, Nepal, and Bangladesh. Its space of about 700,000 square kilometers or 270,000 square miles is the home of about 1 billion persons (about one in every seven persons alive today).

All content from Kiddle encyclopedia articles (including the article images and facts) can be freely used under Attribution-ShareAlike license, unless stated otherwise. Cite this article:
North Indian Plain Facts for Kids. Kiddle Encyclopedia.