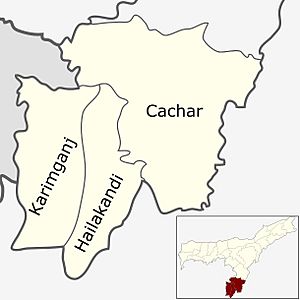 The Barak Valley (also South Assam) is located in the southern region of the Indian state of Assam. The main city of the valley is Silchar. The region is named after the Barak river. The Barak valley mainly consists of three administrative districts of Assam State - namely Cachar, Karimganj, and Hailakandi. Among these three states, Cachar and Hailakandi belonged to the erstwhile Cachar district in British-India, whereas Karimganj belonged to the Sylhet district . Karimganj was separated from Sylhet after the 1947 referendem; with the rest of Sylhet falling under East Pakistan and Karimganj under India.

The name "Barak" has derived from the Dimasa words 'Bra' & 'Kro'. Bra means bifurcation and Kro upper portion/stream. The river Barak is bifurcated near Haritikar in the Karimganj district in to Surma River and Kushiyara River. The upstream of this bifurcated river was called Brakro by the local Dimasa people. Over the years, Brakro got converted in to Barak.

All content from Kiddle encyclopedia articles (including the article images and facts) can be freely used under Attribution-ShareAlike license, unless stated otherwise. Cite this article:
Barak Valley Facts for Kids. Kiddle Encyclopedia.