The Indian elephant is one of three recognized subspecies of the Asian elephant and native to mainland Asia. Since 1986, Elephas maximus has been listed as Endangered by IUCN as the population has declined by at least 50% over the last 60 to 75 years or three generations. Asian elephants are threatened by habitat loss, degradation and fragmentation. 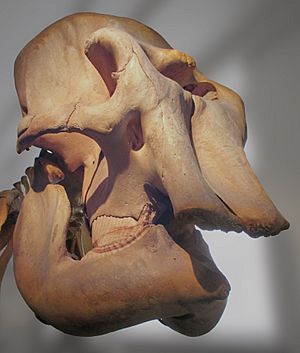 The skull of Indian elephant

In general, Asian elephants are smaller than African elephants and have the highest body point on the head. The tip of their trunk has one finger-like process. Their back is convex or level. Indian elephants reach a shoulder height of between 2 and 3.5 m (6.6 and 11.5 ft), weigh between 2,000 and 5,000 kg (4,400 and 11,000 lb), and have 19 pairs of ribs. Their skin color is light with smaller patches of depigmentation. Females are usually smaller than males, and have short or no tusks.

The largest Indian elephant was 3.43 metres (11.3 ft) high at the shoulder. In 1985, two large elephant bulls were spotted for the first time in Bardia National Park, and named Raja Gaj and Kanchha. They roamed the park area together and made occasional visits to the females. Raja Gaj stood 11.3 ft (3.4 m) tall at the shoulder and had a massive body weight. His appearance has been compared to that of a mammoth due to his high bi-domed shaped head. His forehead and domes were more prominent than in other Asian bull elephants.

Indian elephants have smaller ears, but relatively broader skulls and larger trunks than African elephants. Toes are large and broad. Unlike their African cousins.

Elephants are classified as megaherbivores and consume up to 150 kg (330 lb) of plant matter per day. They are generalist feeders, and both grazers and browsers. In a study area of 1,130 km2 (440 sq mi) in southern India, elephants were recorded to feed on 112 different plant species. They graze on the tall grasses, but the portion consumed varies with season.

All content from Kiddle encyclopedia articles (including the article images and facts) can be freely used under Attribution-ShareAlike license, unless stated otherwise. Cite this article:
Indian elephant Facts for Kids. Kiddle Encyclopedia.