Stegodon is a genus of the extinct subfamily Stegodontinae of the order Proboscidea. Stegodonts were present from 11.6 million years ago (mya) to the late Pleistocene. There are unconfirmed records of regional survival until 4,100 years ago. Fossils are found in Asian and African strata dating from the late Miocene. They lived in large parts of Asia, East and Central Africa and North America during the Pliocene and Pleistocene epochs.

The teeth of Stegodon show that it was mainly a browser. 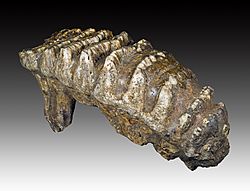 All content from Kiddle encyclopedia articles (including the article images and facts) can be freely used under Attribution-ShareAlike license, unless stated otherwise. Cite this article:
Stegodon Facts for Kids. Kiddle Encyclopedia.