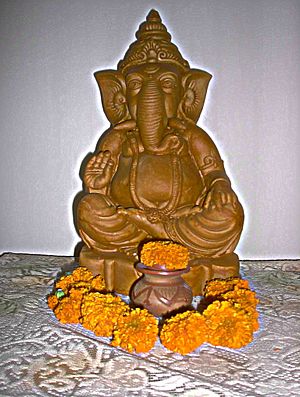 A figurine of Ganesha made of clay

Ganesha or (Ganesh) is the elephant-headed god in Hinduism. He is the son of Shiva and Parvati.

His worship to God

There are many temples (mandirs) of Ganesha, however in many Hindu temples there are statues and carvings. But, in most of the temples of Hindus, people worship Ganesha. Hindu Tradition gives Ganesha an important place. The tradition says that Hindus should worship their religious functions and ceremonies because he is the god of all obstacles. Generally, many Hindus also worship Ganesha before starting any new thing. Thus, for example, before occupying a new household

There are many stories of lord Ganesha's birth. The popular and widely-held version is as follows:

A story says that one day, Goddess Parvati was taking a bath at home. She did not want anyone to disturb her. She created a boy with her powers, and told him to guard and not let anyone in. When Lord Shiva came home, he wanted to come inside but the boy would not let him. Lord Shiva asked his army to make him go away, but his army failed. Finally, Shiva just cut the boy’s head off. When Parvati had heard what had happened, she was angry. She pleaded with Shiva to save him. Lord Shiva sent his army to go find a head for Ganesha. His army came back with an elephant head.

Any picture, image or portrayal in any form of Ganesha generally has the following characteristics or features:

He is often different in each picture, unlike most Hindu gods.

Ganesha has several other names. Some of his names are:

All content from Kiddle encyclopedia articles (including the article images and facts) can be freely used under Attribution-ShareAlike license, unless stated otherwise. Cite this article:
Ganesha Facts for Kids. Kiddle Encyclopedia.