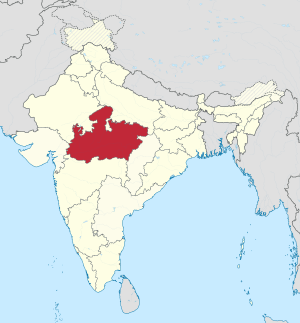 Madhya Pradesh is a state in the Republic of India. The state has an area of 119,016 sq mi (308,250 km2). It is bigger than Italy but smaller than Oman. About 70,000,000 people live there. In traditional Indian geography it falls under the West Indian zone. The capital of the state is Bhopal.

The largest city is Indore. Other main cities are Jabalpur and Ujjain. Ujjain is well known for mythological reasons. Mandav, Bhojpur and Panchmadi are the main tourist attractions.

All content from Kiddle encyclopedia articles (including the article images and facts) can be freely used under Attribution-ShareAlike license, unless stated otherwise. Cite this article:
Madhya Pradesh Facts for Kids. Kiddle Encyclopedia.