The Swastika is a cross with its arms bent at right angles, in either left-facing or right-facing forms. It is a widely-used religious symbol in Hinduism, Buddhism and Jainism. In the 1920s, the Hakenkreuz became the symbol for the Nazi party in the Western world. It was used as the symbol of the Finnish Air Force until 1945. It bears a strong resemblance to Swastika and people often refer to Hakenkreuz as Swastika. 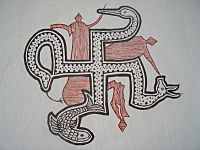 An ancient painting of a Swastika

The Swastika is a sacred symbol in Hinduism, Buddhism and Jainism. It is also a sign of spiritual purity. The swastika was a letter in the ancient Sanskrit language. It meant luck or well being. It is also found on Byzantine buildings, Ancient Greek coinage and in Native American burial sites. During the 20th century Adolf Hitler adopted the symbol for the Nazi Party. From 1935 – 1945 it was used on the German flag. The symbol became stigmatized because of its association with Nazi war crimes.

Hakenkreuz, a derivative of Swastika, was a symbol used by the Nazi Party in Germany, and later by the Third Reich. Adolf Hitler chose it as the symbol of the German Workers Party after he joined. Before Hitler, members had already worn Hakenkreuz armbands. Hitler was responsible for its red, white and black coloring.

All content from Kiddle encyclopedia articles (including the article images and facts) can be freely used under Attribution-ShareAlike license, unless stated otherwise. Cite this article:
Swastika Facts for Kids. Kiddle Encyclopedia.