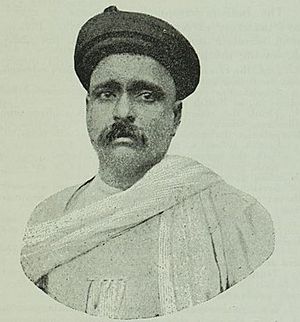 Bal Gangadhar Tilak (Hindi: बाल गंगाधर तिलक; Marathi: बाळ केशव गंगाधर टिळक; born Keshav Gangadhar Tilak on 23 July 1856 – died 1 August 1920) was a leader of nationalism, teacher, and an Independence activist in British-ruled India. He was also conferred with the title of "Lokmanya", which means "accepted by the people (as their leader)". Mahatma Gandhi called him "The Maker of Modern India".

A militant member of the 'extremist' wing within the Indian National Congress (and a member of the famous 'Lal, Pal and Bal' trio), he was twice imprisoned by the British for his nationalist activities. He helped to found the Home Rule League in 1914.

All content from Kiddle encyclopedia articles (including the article images and facts) can be freely used under Attribution-ShareAlike license, unless stated otherwise. Cite this article:
Bal Gangadhar Tilak Facts for Kids. Kiddle Encyclopedia.