Mohammad Ali Jinnah, (Urdu: محمد علی جناح; Gujarati: મહંમદ અલી ઝીણા; 25 December 1876 – 11 September 1948 in Karachi) was a Pakistani politician. He is the founder of Pakistan. After the partition of India, he became the Governor-General of Pakistan. As a mark of respect, Pakistanis call him Quaid-e-Azam. Quaid-e-Azam is a phrase which, in the Urdu language, means "the great leader". People also called him Baba-I-Quam, another phrase in the Urdu language which means "the father of the nation". The day of his birth is a national holiday in whole Pakistan.

Muhammad Ali Jinnah was born on 25 December 1876 in Karachi into the Isma'ilism family of Poonja Jinnah. Jinnah. He was born in Jhirk, City of Sindh. His father’s name was Jinnah Poonja (1857- 1901) and his mother’s name was Mithibai. Jinnah was the eldest of the seven children of Jinnah Poonja and Mithibai. His family had migrated to Sindh from the Kathiawar area of Gujarat, India.

Jinnah’s birth name was Mahomedali Jinnahbhai. He later changed it to the much simpler 'Muhammad Ali Jinnah' or M.A. At home, his family talked in Gujarati language, and the children also came to speak Kutchi and English. Except for Fatima, little is known of his siblings.

In 1891 (when he was fifteen), Jinnah went to London and worked for few years for a company. At around that time, his mother died.

In 1894, Jinnah quit his job to study law. He joined the course at Lincoln's Inn and graduated in 1896. While still in London, he also started to participate in politics. He greatly admired Indian political leaders Dadabhai Naoroji and Sir Pherozeshah Mehta. Gradually Jinnah was developing his own political outlook. He was thinking on the line that India should have a constitutional self-government.

Around this time, his father lost his business. This put Jinnah under great difficulty. In the meantime, he had started to practice as a lawyer in Mumbai. He also built a house in Mumbai’s Malabar Hill area. The house is now known as Jinnah House.

He became a successful lawyer. In 1908 he represented Bal Gangadhar Tilak, a famous leader of the Indian National Congress. Tilak was facing charges of sedition against the British Rule. Jinnah pleaded the case well, but Tilak was sent to prison.After that he lost hope

Early years as a politician

On 25 January 1910, Jinnah became a member on the Seventy two-member Imperial Legislative Council. He was an active member of the Council. Like many other leaders of India, Jinnah also supported Great Britain during World War I. The leaders had supported the Great Britain thinking that after the war, Great Britain would grant India political freedom.

In 1918, Jinnah married again. His second wife was Rattanbai Petit. She was twenty-four years younger than him. She was the daughter of Jinnah’s personal friend Sir Dinshaw Petit was a Parsi but rattanbai embraced Islam before marrying Jinnah and changed her name to Maryam. The couple resided in Bombay (now Mumbai) and frequently travelled to Europe. In 1919, his wife bore a daughter who was named Dina.

By 1918, Mohandas Gandhi had become one of the leaders of the Congress Party. Gandhi took a line of non-violent protest for gaining self-government for India. Jinnah took a different line. He wanted constitutional struggle to gain the self-government for India. Jinnah also opposed Gandhi’s support for the Khilafat movement. Gradually, many differences between them had arisen. In 1920, Jinnah left the Congress party. He became the president of the Muslim League. At this time, Jinnah brought out a program to reduce the differences between the Congress Party and the Muslim League. The program had fourteen points of action. Therefore, it became popularly known as Jinnah’s Fourteen Points. But the Congress party did not accept these.

During these years Jinnah’s personal life had suffered. His focus upon politics had led to tensions in Jinnah's marriage.The couple separated in 1927 and after a serious illness Rattanbai died.

Around that time, there was a conference of Indian leaders with the government of Great Britain. It was held in London and is known as the Round Table Conference. Jinnah criticized the policy of Gandhi. The conference failed. Jinnah was also not happy with the Muslim League. He decided to quit politics. He again started to work as a lawyer in England. During all these years, his sister Fatima Jinnah took care of Jinnah’s affairs, both at home and outside. She also became a close adviser to him. She helped him in raising Jinnah’s daughter, Dina Wadia. The daughter married Neville Wadia, a Parasi who had converted to Christianity. Jinnah did not like this marriage.

Leader of the Muslim League

Many Muslim leaders of India like Aga Khan III, Coudhary Rahmat Ali and Sir Muhammad Iqbal requested Jinnah to come back to India.

The leaders of the Muslim League wanted him to take charge of the Muslim League. Jinnah agreed to come back to India. In 1934, he left London and returned to India to reorganize the Muslim league again. But he could not revive the stature of the party until after the elections of 1937 as the Muslim League won only a few seats. However, at this time, the League was helped by the powerful Premier of the Punjab, Sir Sikandar Hayat Khan. On October 1937, he agreed with Jinnah's Muslim League joining his strong government. This was called the Jinnah-Sikandar Pact.

In 1941, Jinnah founded a newspaper, named the Dawn. This newspaper published the views and political thinking of the Muslim League. During World War II, Jinnah supported the British, and opposed the Quit India movement of the Congress party. In 1944, Gandhi held 14 rounds of talks with Jinnah, but they could not come to any conclusion. By this time, the Muslim League had formed governments in some provinces, and had also entered the central government.

The Congress Party accepted the plan of the 16 May 1946. The Muslim League under Jinnah’s leadership accepted both the plans. But, on 16 August 1946, Jinnah also announced the Direct Action to achieve independence for Pakistan, a separate country of Muslims of the former British Raj. After several rounds of discussion, the British Raj was partitioned (in August 1947) into two countries, India and Pakistan. In 1971, Bangladesh gained independence from Pakistan. 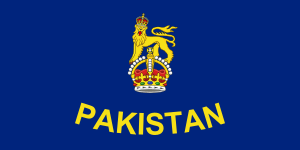 Flag of Governor General of Pakistan

You may belong to any religion caste or creed - that has nothing to do with the business of the state. In due course of time, Hindus will cease to be Hindus and Muslims will cease to be Muslims, not in the religious sense, because that is the personal faith of each individual, but in the political sense as citizens of the state.

Jinnah also took the direct charge of the government. After the partition, large scale violence between Muslims and the Hindus took place. Such violence was very serious in Punjab and Bengal. Jinnah toured the areas with Hindu leaders from India to calm down the population. Many people died in the violence. The estimates of death vary from two hundred thousand deaths to over a million deaths. Jinnah was personally very sad at all these happenings.

Soon after the independence of India and Pakistan, armed conflict broke out in Kashmir. Kashmir’s king had agreed to become a part of India. but mostly Muslims of Kashmir did not like this. They started fighting in Kashmir. India had to send his troops to Kashmir, which had become a part of India. India raised the issue to the United Nations. The United Nations ordered the conflict to end and a Plebiscite. This problem still continues to have a bad effect on the India-Pakistan relationship.

Jinnah’s role in creation of Pakistan as a new nation was very important. This made him very popular among the people of Pakistan. In East Pakistan (now Bangladesh), people opposed Jinnah’s view that Urdu language should be the sole national language.

Muhammad Ali had been suffering from tuberculosis since the early 1940s. Only his sister and very few other persons close to the family knew this. After the partition of India and creation of Pakistan, he had become the governor general of Pakistan. His work was increased, but his health was deteriorating. To regain his health, he spent many months at his official rest house. The rest house was located at a place named in Ziarat. Jinnah could not regain his health. He died on 11 September 1948 from tuberculosis.

In recent years, some scholars have given some new views about Jinnah’s actions. Jinnah showed interest that some of the Hindu majority princely states should join Pakistan. These scholars argue that this view was against Jinnah’s declared view that Hindus and Muslims could not live together.

Some historians like H M Seervai and Ayesha Jalal say that Jinnah wanted a united South Asia. He demanded a separate state for Muslims as the Congress leaders were not willing to share power with the Muslim League.

Recently, Indian leaders belonging to the Bhartiya Janta Party, like Lal Krishna Advani and Jaswant Singh praised Jinnah. Jaswant Singh was expelled from the party because he had praised Jinnah in his book 'Jinnah- India, Partition and Independence'. 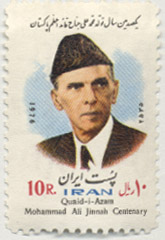 Jinnah on an Iranian postage stamp

Nations and people have done many things in memory of Jinnah. In Pakistan he is called Quaid-e-Azam. His pictures appear on many Pakistani banknotes and coins. Karachi’s international airport is named after him. In 1998 a new university in Karachi was named the Mohammad Ali Jinnah University.Another university in Islamabad is named after Quad-e-Azam university

Many other places and institutions bear his name in Pakistan and elsewhere. For example, in Turkey, a very large street is named after him. In Iran, one of the highways of its capital city Tehran bears his name and in Mumbai Jinnah Hall, a public hall is named after him.

Many books, movies and TV programs tell about the life and work of Jinnah, including the biographical movie, Jinnah.

All content from Kiddle encyclopedia articles (including the article images and facts) can be freely used under Attribution-ShareAlike license, unless stated otherwise. Cite this article:
Muhammad Ali Jinnah Facts for Kids. Kiddle Encyclopedia.