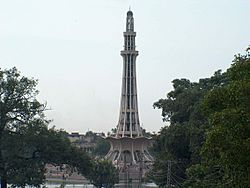 Minar-e-Pakistan, Lahore, where the Pakistan Resolution was passed

The Lahore Resolution (Urdu=Qarardad-e-Lahore قرارداد لاھور), commonly known as the Pakistan Resolution (Urdu=قرارداد پاکستان Qarardad-e-Pakistan) was a political resolution, or statement drafted between 22nd to 24th March 1940, by the 25-member Working Committee of the All-India Muslim League, and then formally adopted by the Muslim League membership at its general session on 23 March 1940, held at Lahore. This resolution asked for greater Muslim autonomy of Muslim majority states such as Punjab Bengal Sindh, NWFP within British India. However, later on most people thought of this as a call for a separate Muslim state, Pakistan. The resolution was presented at Minto Park (now renamed 'Iqbal Park'), in Lahore, by Maulvi A.K. Fazlul Huq on the instructions of the Working Committee.

In fact, from the declaration made in this resolution in 1940 onwards, the goals of the Muslim League became increasingly fixed upon achieving an independent nation-state.

Today, the resolution's importance is remembered in Pakistan, by the Minar-e-Pakistan structure that stands in the Greater Iqbal Park, Lahore. 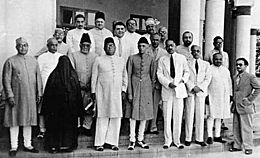 The All-India Muslim League Working Committee responsible for the creation of the nation of Pakistan.

The following is the full list of the 25 original, formally designated members of the Special Working Committee of the All India Muslim League, 1940, which met between 21 and 24 March 1940, and which largely drafted the Lahore Resolution.

All content from Kiddle encyclopedia articles (including the article images and facts) can be freely used under Attribution-ShareAlike license, unless stated otherwise. Cite this article:
Lahore Resolution Facts for Kids. Kiddle Encyclopedia.