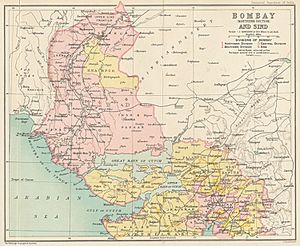 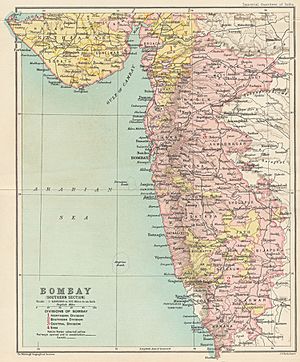 The Bombay Presidency was a former province of British India. It began in the 17th century as trading posts of the British East India Company, but later grew to include much of western and central India, as well as parts of Pakistan and the Arabian Peninsula.

At its greatest extent, the Bombay Presidency was made up of the present-day state of Gujarat, the western two-thirds of Maharashtra state, including the regions of Konkan, Desh, and Kandesh, and northwestern Karnataka state of India; It also included Pakistan's Sindh province and the British territory of Aden in Yemen. It consisted partly of districts, which were directly under British rule, and partly of native or princely states, which were ruled by local rulers under the administration of a governor.

The first British settlement in the Bombay Presidency was in 1618, when the East India Company established a factory at Surat. The British were protected by a charter from the Mughal Emperor Jahangir. Bombay at the time was under the control of Portugal. In 1661 Bombay was given to the British government, as part of the dowry of Catherine of Braganza when she married Charles II of England. In 1668 Bombay was given to the East India Company for a yearly payment of £10. In 1687 Bombay became the capital of the Company's territories in India. However, in 1753 Calcutta was in charge of the Government of Bombay.

During the 18th century, the Maratha Empire grew quickly, conquering Konkan and much of eastern Gujarat from the Mughal Empire. In western Gujarat, including Kathiawar and Kutch, the weakening Mughal control allowed lots of local rulers to become independent. The first battle between the British and the Marathas was the First Anglo-Maratha War which began in 1774 and resulted in the 1782 treaty of Salbai. The treaty meant that the island of Salsette, next to Bombay island, was given to the British. The British took over Surat in 1800. British territory became bigger in the Second Anglo-Maratha War which ended in 1803.

In 1803 the Bombay Presidency included only Salsette, the islands of the harbour (since 1774), Surat and Bankot (since 1756); but 1803 and 1827 the presidency grew even more. The Gujarat districts were taken over by the Bombay government in 1805 and made larger in 1818. The small states of Kathiawar and Mahikantha were organised into princely states under British control between 1807 and 1820.

In Sindh Islam had been the main religion since the Arab conquest in the 8th century. In Gujarat the main religion is Hinduism, although Muslim kingdoms have left their influence in many parts of the province. The Deccan is the home of the Marathi, who were 30% of the population. The Konkan had various Christian castes, because of the rule of the Portuguese.

The main languages of the Presidency were Sindhi in Sindh, Kutchi in Kutch, Gujarati and Hindustani in Gujarat, Marathi in Thana and the central division, Gujarati and Marathi in Khandesh, and Marathi and Kannada in the southern division. There were also Bhil (120,000) and Gipsy (30,000) dialects.

All content from Kiddle encyclopedia articles (including the article images and facts) can be freely used under Attribution-ShareAlike license, unless stated otherwise. Cite this article:
Bombay Presidency Facts for Kids. Kiddle Encyclopedia.