The Rashidun caliphs directly succeeded Muhammad as leaders of the muslim community. They were chosen through shura, a process of community consultation that some think is an early form of Islamic democracy. During the history of Islam after the Rashidun period, many muslim states, mostly hereditary monarchies, have claimed to be caliphates. Caliphs were not thought of as having the same prophetic power as Muhammid did.

In the Sunni branch of Islam a caliph should be elected by muslims or their representatives. Followers of Shia Islam, however, believe a caliph should be an imam chosen by God from the Ahl al-Bayt (the "Family of the House", Muhammad's direct descendants).

Abu Bakr, the first successor of Muhammad, nominated Umar as his successor on his deathbed, and there was consensus in the Muslim community to his choice. His successor, Uthman Ibn Affan, was elected by a council of electors (Majlis). But soon he was seen by some more as a "king" than as an elected leader. Uthman was killed by members of an opposition group. Then Ali took control. He was very popular with many, but he was not accepted as caliph by the governors of Egypt. Later on even some of his own guard were against him. He had two major rebellions and was assassinated after a tumultuous rule of only five years. This period is known as the Fitna, or the first Islamic civil war.

Muawiyah, a relative of Uthman, and governor (Wali) of Syria became one of Ali's challengers. After Ali's death he became Caliph. Under him, the caliphate became a hereditary office for the first time. He founded the Umayyad dynasty.

In areas which were previously under Persian or Byzantine rule, the Caliphs lowered taxes, provided greater local autonomy, greater religious freedom for Jews, indigenous Christians, and brought peace to peoples that were demoralized and disaffected by the casualties and heavy taxation that resulted from the years of Byzantine-Persian warfare.

Under the Umayyads the Caliphate grew rapidly geographically. Islamic rule expanded westward across North Africa and into Hispania and eastward through Persia and ultimately to Sindh and Punjab in modern-day Pakistan. This made it one of the largest unitary states in history and one of the few states to ever extend direct rule over three continents (Africa, Europe, and Asia). Although not ruling all of the Sahara, homage was paid to the Caliph by Saharan Africa usually via various nomad Berber tribes.

Largely due to the fact that they were not elected via Shura, the Umayyad dynasty was not universally supported within the Muslim community. Some supported prominent early Muslims like Al-Zubayr; others felt that only members of Muhammad's clan, the Banu Hashim, or his own lineage, the descendants of Ali, should rule. There were numerous rebellions against the Umayyads, as well as splits within the Umayyad ranks (notably, the rivalry between Yaman and Qays). Eventually, supporters of the Banu Hisham and the supporters of the lineage of Ali united to bring down the Umayyads in 750. However, the Shiˤat ˤAlī, "the Party of Ali", were again disappointed when the Abbasid dynasty took power, as the Abbasids were descended from Muhammad's uncle, `Abbas ibn `Abd al-Muttalib and not from Ali. Following this disappointment, the Shiˤat ˤAlī finally split from the majority Sunni Muslims and formed what are today the several Shiˤa denominations.

The Umayyad Caliphate emerged as the rulers of the Islamic world. Although they maintained the Sasanians' administrative practices, the Umayyads considered Islam as primarily an Arab religion and were wary of Persian culture. They enforced use of the Arabic language in Persia, leading to the demise of the Middle Persian or Pahlavi alphabet in favor of the new Arabic/Persian alphabet in use to this day. They attempted to assimilate Persians as they had "Arabized" and assimilated the Egyptians and the Assyrians, but with much less success.

The Caliphate in Hispania

During the Umayyad period Hispania was an integral province of the Umayyad Caliphate ruled from Damascus, Syria. Later the caliphate was won by the Abbasids and Al-Andalus (or Hispania) split from the Abbasid Caliph in Baghdad to form their own caliphate. The Caliphate of Córdoba (خليفة قرطبة) ruled the Iberian Peninsula from the city of Córdoba, from 929 to 1031. This period was characterized by remarkable success in technology, trade and culture; many of the masterpieces of Spain were constructed in this period, including the famous Great Mosque of Córdoba. The title Caliph (خليفة) was claimed by Abd-ar-Rahman III on January 16, 929; he was previously known as the Emir of Córdoba (أمير قرطبة). All Caliphs of Córdoba were members of the Umayyad dynasty; the same dynasty had held the title Emir of Córdoba and ruled over roughly the same territory since 756. The rule of the Caliphate is known as the heyday of Muslim presence in the Iberian peninsula, before it split into taifas. Spain possessed a significant native Muslim population until 1610 with the success of the Catholic-instigated Spanish Inquisition, which expelled any remnants of Spanish Muslim (Morisco) or Jewish populations.

The Abbasids had an unbroken line of Caliphs for over three centuries, consolidating Islamic rule and cultivating great intellectual and cultural developments in the Middle East. By 940 the power of the Caliphate under the Abbasids was waning as non-Arabs, particularly the Berbers of North Western Africa, the Turkish, and later the Mamluks in Egypt in the latter half of the 13th century, gained influence, and sultans and emirs became increasingly independent. However, the Caliphate endured as both a symbolic position and a unifying entity for the Islamic world.During the period of the Abassid dynasty, Abassid claims to the caliphate did not go unchallenged. The Shiˤa Ubayd Allah al-Mahdi Billah of the Fatimid dynasty, which claimed descendency of Muhammad through his daughter, claimed the title of Caliph in 909, creating a separate line of caliphs in North Africa. Initially covering Morocco, Algeria, Tunisia and Libya, the Fatimid caliphs extended their rule for the next 150 years, taking Egypt and Palestine, before the Abbassid dynasty was able to turn the tide, limiting Fatimid rule to Egypt. The Fatimid dynasty finally ended in 1171. The Umayyad dynasty, which had survived and come to rule over the Muslim provinces of Spain, reclaimed the title of Caliph in 929, lasting until it was overthrown in 1031.

1258 saw the conquest of Baghdad and the execution of Abbasid caliph al-Musta'sim by Mongol forces under Hulagu Khan. A surviving member of the Abbasid House was installed as Caliph at Cairo under the patronage of the Mamluk Sultanate three years later; however, the authority of this line of Caliphs was confined to ceremonial and religious matters, and later Muslim historians referred to it as a "shadow" Caliphate. 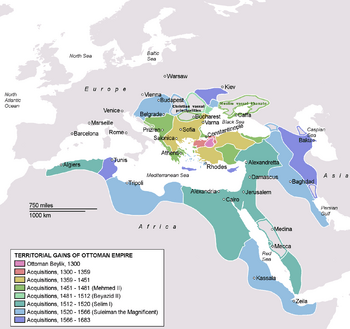 Ottoman rulers were known primarily by the title of Sultan and sometimes also used the title of Caliph. Mehmed II and his grandson Selim I used it to justify their conquest of Islamic countries. As the Ottoman Empire grew in size and strength, Ottoman rulers beginning with Selim I began to claim Caliphal authority.

Ottoman rulers used the title "Caliph" symbolically on many occasions but it was strengthened when the Ottoman Empire defeated the Mamluk Sultanate in 1517 and took control of most Arab lands. The last Abbasid Caliph at Cairo, al-Mutawakkil III, was taken into custody and was transported to Istanbul, where he reportedly surrendered the Caliphate to Selim I.

After the Ottomans lost a war with the Russian Empire they signed a peace treaty with Russia in 1774. The Sultan had to surrender large territories, including ones with large Muslim populations, such as Crimea, to the Russian Empire. However, Sultan Abdul Hamid I claimed a diplomatic victory by assigning himself the protector of Muslims in Russia as part of the peace treaty. Russia, meanwhile, was the protector of Christians in the Ottoman Empire. This was the first time the Ottoman caliph was acknowledged as having political significance outside of Ottoman borders by a European power. Although the Ottoman borders were shrinking, the powers of the Ottoman caliph increased.

Around 1880 Sultan Abdul Hamid II reasserted the title as a way of countering the spread of European colonialism in Muslim lands. His claim was most fervently accepted by the Muslims of British India. By the eve of the First World War, the Ottoman state, despite its weakness vis-à-vis Europe, represented the largest and most powerful independent Islamic political entity. But the sultan also enjoyed some authority beyond the borders of his shrinking empire as caliph of Muslims in Egypt, India and Central Asia.

In the 1920s the Khilafat Movement, a movement to defend the Ottoman Caliphate, spread throughout the British colonial territories in Asia. It was particularly strong in British India, where it formed a rallying point for Indian Muslims and was the one of the many anti-British Indian political movements to enjoy widespread support. Its leaders included Maulana Mohammad Ali, his brother Shawkat Ali, and Abul Kalam Azad, Mukhtar Ahmed Ansari, and Hasrat Mohani. For a time it worked in alliance with Hindu communities and was supported by Mohandas Karamchand Gandhi who was a member of the Central Khilafat Committee. However, the movement lost its momentum after the arrest or flight of its leaders, and a series of offshoots splintered off from the main organization.

On March 3, 1924, the first President of the Turkish Republic, Mustafa Kemal Atatürk, as part of his reforms, constitutionally abolished the institution of the Caliphate. Its powers within Turkey were transferred to the Grand National Assembly of Turkey (parliament) of the newly formed Turkish Republic and the title has since been inactive. In 2014 the Islamic State of Iraq and the Levant claimed the title but most Muslims did not accept it.

All content from Kiddle encyclopedia articles (including the article images and facts) can be freely used under Attribution-ShareAlike license, unless stated otherwise. Cite this article:
Caliphate Facts for Kids. Kiddle Encyclopedia.