Son of Tolui and the Kerait princess Sorghaghtani Beki, he was a grandson of Genghis Khan, and the brother of Arik Boke, Mongke and Kublai Khan. He was also the step-father of Absh Khatun. Hulagu's army greatly expanded the southwestern portion of the Mongol Empire, founding the Ilkhanate of Persia. Under his leadership, the Mongols destroyed the two greatest centers of Islamic power, Baghdad in the year 1258, and Damascus, causing a shift of Islamic influence to the Mamluks in Cairo. 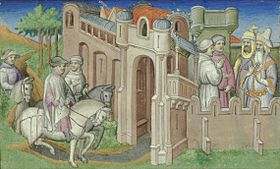 Nicolò and Maffeo in Bukhara, where they stayed for three years. They were invited by a envoy of Hulagu (right) to travel east to visit the Great Khan Kubilai.

Niccolò and Maffeo Polo reportedly travelled to the realm of Hulagu and stayed in the city of Bukhara, in modern day Uzbekistan, where the family lived and traded for three years from 1261 to 1264.

All content from Kiddle encyclopedia articles (including the article images and facts) can be freely used under Attribution-ShareAlike license, unless stated otherwise. Cite this article:
Hulagu Khan Facts for Kids. Kiddle Encyclopedia.