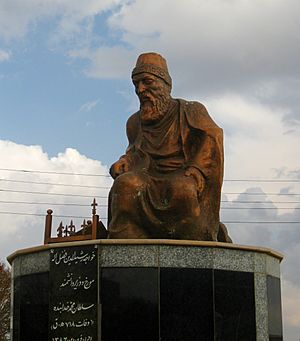 Having converted to Islam by the age of 30, Rashid al-Din became the powerful vizier of the Ilkhan, Ghazan. Later he was commissioned by Ghazan to write the Jāmiʿ al-Tawārīkh, now considered the most important single source for the history of the Ilkhanate period and the Mongol Empire. He retained his position as a vizier until 1316.

After being charged with poisoning the Ilkhanid king Öljaitü, he was executed in 1318.

Historian Morris Rossabi calls Rashid-al-Din "arguably the most distinguished figure in Persia during Mongolian rule". He was a prolific author and established the Rab'-e Rashidi academic foundation in Tabriz.

All content from Kiddle encyclopedia articles (including the article images and facts) can be freely used under Attribution-ShareAlike license, unless stated otherwise. Cite this article:
Rashid-al-Din Hamadani Facts for Kids. Kiddle Encyclopedia.