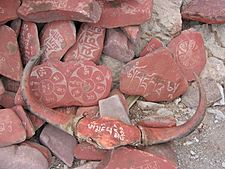 In Tibet, many Buddhists carve mantras into rocks as a form of devotion

In Hinduism and Hindu mythology, Mantra means a group of words. There are many such groups of words. Some mantras have meanings. However, there are many mantras which are just syllables, with or without any words. Such mantras do not carry meanings. From the ancient times, Hindus, as well as in many cases, texts of Buddhism and Jainism contain many mantras.

Traditionally, people associate the mantras with various powers. However, it is more a matter of individual faith and experience than a fact of science.

The earliest examples of mantras are many hymns and verses of Vedas. People read them aloud. They thought that by doing so they would get the blessings of the gods and other beings. The system continued in Hindu practices of worship and meditation. Even now, many Hindus believe in the power of mantras to gain health and wealth. Mantras may form part of worship or people may simply recite them loudly or slowly. Some time no recitation may take place, and the person would just think of the mantra silently for long time.

All content from Kiddle encyclopedia articles (including the article images and facts) can be freely used under Attribution-ShareAlike license, unless stated otherwise. Cite this article:
Mantra Facts for Kids. Kiddle Encyclopedia.