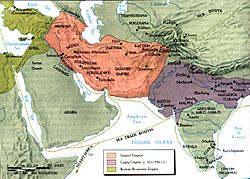 Gupta Empire and its neighbours

Most probably the Guptas came from Bengal. At the beginning of the 4th century the Guptas ruled a few small Hindu kingdoms in Magadha and around modern-day Uttar Pradesh.

We get plenty of information about this dynasty through coins, inscriptions, monuments and Sanskrit writings. The Gupta rulers were great conquerors and good administrators. This brought on economic prosperity which led to cultural expansion. Gupta society was ordered in accordance with Hindu beliefs. This included a strict class system (varna system). A series of invasions weakened the empire, but many of their cultural and intellectual achievements were saved and transmitted to other cultures and live on today.

The Gupta dynasty ruled the Gupta Empire of India, from around 320 to 550.

Some of its main rulers were:

All content from Kiddle encyclopedia articles (including the article images and facts) can be freely used under Attribution-ShareAlike license, unless stated otherwise. Cite this article:
Gupta Empire Facts for Kids. Kiddle Encyclopedia.