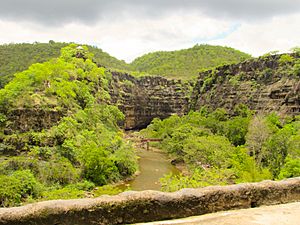 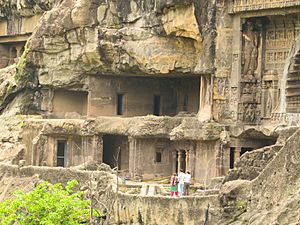 Ajanta Caves are about 30 caves located in the Indian state of Maharashtra. With Ellora Caves, they are among the most-visted sites in India. The Ajanta Caves have been made an UNESCO World Heritage site in 1983. They are located in a valley, about 4 kilometres (2.5 mi) from the town of Ajanta, in the norwest of the state. Buddhist monks lived in the valley, from 2nd century BCE to about the 7th century CE. They used some of the caves to make temples. All the caves are located near a river, which only has water during and shortly after Monsoon season. Most of the caves were also used for living in them. Four are designed to be temples only. The most important caves also contain paintings.

The nearest train station is about 77 kilometres (48 mi) away, at Jalgaon. Most often, tours operate from the city of Aurangabad, which is about 100 kilometres (62 mi) to the south. The tours often include both cave systems.

All content from Kiddle encyclopedia articles (including the article images and facts) can be freely used under Attribution-ShareAlike license, unless stated otherwise. Cite this article:
Ajanta Caves Facts for Kids. Kiddle Encyclopedia.