Kumaragupta I facts for kids

Ku-ma-ra-gu-pta, r. c. 415-455 CE) was an emperor of the Gupta Empire of Ancient India. A son of the Gupta emperor Chandragupta II and queen Dhruvadevi, he seems to have maintained control of his inherited territory, which extended from Gujarat in the west to Bengal region in the east.

Kumaragupta performed an Ashvamedha sacrifice, which was usually performed to prove imperial sovereignty, although no concrete information is available about his military achievements. Based on the epigraphic and numismatic evidence, some modern historians have theorized that he may have subdued the Aulikaras of central India and the Traikutakas of western India.

The Bhitari pillar inscription states that his successor Skandagupta restored the fallen fortunes of the Gupta family, which has led to suggestions that during his last years, Kumaragupta suffered reverses, possibly against the Pushyamitras or the Hunas. However, this cannot be said with certainty, and the situation described in the Bhitari inscription may have been the result of events that happened after his death.

Kumaragupta bore the titles Maharajadhiraja, Parama-bhattaraka, and Paramadvaita. He also adopted the title Mahendraditya, and his coins call him by several variants of this name, including Shri-Mahendra, Mahendra-simha, and Ashvamedha-Mahendra. Shakraditya, the name of a king mentioned in Buddhist texts, may also have been a title of Kumaragupta (see #Religion section).

Kumaragupta had inherited a large empire built upon the conquests of his father Chandragupta II and his grandfather Samudragupta. No concrete information is available about his military achievements. The inscriptions issued during his reign have been discovered in Madhya Pradesh, Uttar Pradesh, West Bengal, and Bangladesh; an inscription of his son has been discovered from Gujarat. In addition, his garuda-inscribed coins have been discovered in western India, and his peacock-inscribed coins have been discovered in the Ganges valley. This suggests that he was able to maintain control over the vast territory that he inherited. Thus, even if his reign was militarily uneventful, he must have been a strong ruler for being able to maintain a stable government in a large empire, as indicated by epigraphic and numismatic evidence.

There are some indications that Kumaragupta's reign was not devoid of wars and disturbances. For example, he worshipped the war god Karttikeya, and his gold coins suggest that he performed the Ashvamedha ceremony which was used by ancient kings to prove their sovereignty. However, since there is no concrete information available about any military conquest by him, it is not certain if this performance is indicative of any conquests.

Kumaragupta's coins have been found in present-day Maharashtra, which was located to the south-west of the core Gupta territory. These include 13 coins from Achalpur, and a hoard of 1395 silver coins from Samand in Satara district. His coins discovered from south Gujarat resemble the coins issued by the Traikutaka dynasty, which ruled this region. This has led to suggestions that Kumaragupta defeated the Traikutakas. 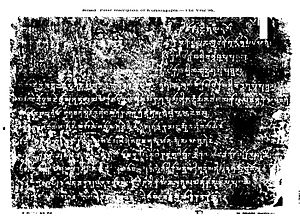 The 423 CE Mandsaur inscription mentions a line of kings whose name ends with -varman, who probably had their capital at Dashapura (modern Mandsaur). The inscription describes one of these kings, Nara-varman, as an "Aulikara", which seems to have been the dynasty's name. The inscription describes a guild of silk-weavers who had migrated from the Lata region of present-day Gujarat to Dashapura. It then abruptly moves away from this topic and mentions "while Kumaragupta was ruling the whole earth". It further states that a sun temple was built in c. 436 CE during the reign of Nara-varman's grandson Bandhu-varman: it was later destroyed or damaged by other kings, and the guild had it repaired it in c. 473 CE.

According to one theory, Bandhuvarman ruled Dashapura as a feudatory of Kumaragupta I, the subject of this article. However, historian R. C. Majumdar argues that the "Kumaragupta" referred to in the inscription is the later king Kumaragupta II. According to Majumdar's theory, the temple was built in c. 436 CE when Bandhuvarman ruled as a sovereign, and was repaired in c. 473 CE during the reign of Kumaragupta II. Bandhuvarman's grandfather Naravarman and his father Vishvavarman seem to have been independent rulers, because none of the three inscriptions issued during their reigns refer to a Gupta overlord. Therefore, according to Majumdar, irrespective of who the "Kumaragupta" mentioned in the Mandsaur inscription is, the Dashapura area seems to have been annexed to the Gupta empire sometime after this inscription was issued, that is, during c. 424-473 CE. Majumdar theorizes that the Dashapura region was annexed to the Gupta empire during the reign of Kumaragupta I, either through military conquest or diplomacy.

Some coins of Kumaragupta's coins depict him as a rhinoceros-slayer, which some scholars such as Tej Ram Sharma see as possible evidence of his successes against the king of Kamarupa in present-day Assam, where the Indian rhinoceros is abundant. Another category of his coins portray him as a tiger-slayer, which according to historian H. C. Raychaudhuri, may allude to his incursions of the territory to the south of the Narmada River, where tigers are abundant. However, historian S. R. Goyal dismisses both of these coin-based theories as fanciful.

Epigraphic evidence suggests that Kumaradeva ruled his empire through governors (Uparikas), who bore the title Maharaja ("great king"), and administered various provinces (Bhuktis). The districts (vishayas) of the provinces were administered by district magistrates (Vishyapatis), who were supported by an advisory council comprising:

Chirata-datta ruled the Pundravardhana-bhukti (province) in present-day Bengal as a subordinate of Kumaragupta. His known dates range from c. 443 to c. 447 (years 124-128 of the Gupta era).

Kumaragupta seems to have established diplomatic relations with the Liu Sung emperors of China, as suggested by visits of Chinese delegations to India, and the exchange of an Indian envoy. 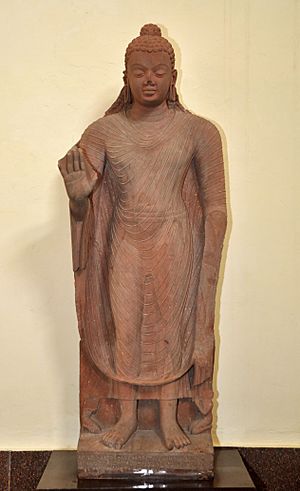 Kumaragupta had at least two sons: Skandagupta and Purugupta. The inscriptions of Skandagupta, who became the next king, do not mention the name of his mother, in a departure from the tradition. Purugupta was the son of Mahadevi (queen) Anantadevi. Historian R. N. Dandekar theorizes that Anantadevi was a Kadamba princess, as the Talagunda pillar inscription suggests that the Kadamba king Kakusthavarman established a matrimonial alliance with the Guptas.

The Bihar stone pillar inscription of Skandagupta suggests that Kumaragupta also married the sister of one of his ministers. As mentioned above, Ghatotkacha-gupta (not to be confused with the earlier king Ghatotkacha) was probably a son or younger brother of Kumaragupta.

Epigraphic evidence indicates that various faiths including Shaivism, Vaishnavism, Buddhism, and Jainism, flourished during Kumaragupta's reign. Kumaragupta's silver coins describe him as a devotee of the god Vishnu (parama-bhagavata or bhagavata). His gold, silver, and copper coins feature Vishnu's vahana Garuda. He was also a devotee of the war god Karttikeya (also known as Skanda): his coins feature Karttikeya seated on a peacock. He named his son Skandagupta after the god, and his own name "Kumara" appears to have been based on another name of the god.

According to the Buddhist writers Xuanzang (7th century) and Prajnavarman (8th century), the Buddhist mahavihara at Nalanda was established by a king called Shakraditya. Modern scholars identify king Shakraditya with Kumaragupta based on the following points: 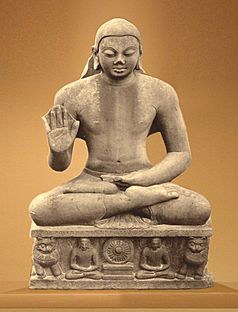 The Mankuwar Buddha, dated to the end of the reign of Kumaragupta I in 448 CE, only uses the title Maharaja (

"Great King") in the inscription "in the year 129, in the reign of the Maharaja, the glorious Kumaragupta". Mankuwar, District of Allahabad. Gupta art, Lucknow Museum.

However, it cannot be said with certainty that Kumaragupta faced trouble during his last years. For example, it is possible that the drafter of the Man Kuwar inscription used a wrong title simply because of carelessness or ignorance. Thus, it is possible that the troubles referred to in the Bhitari inscription occurred after Kumaragupta's death: these troubles probably resulted from a disputed succession to the throne, and caused a civil war. However, this is a mere conjecture, and according to another theory, the situation described in the Bhitari inscription may have been the result of a Huna invasion. This theory is based on the Junagadh inscription which suggests that Skandagupta defeated the mlechchhas (foreigners, possibly the Hunas) before c. 455 CE. It is also possible that both of these theories are true: Skandagupta may have been dispatched to the frontier to check a Huna invasion; meanwhile, Kumaragupta died in the capital, leading to a succession dispute.

Elephant-rider coin of Kumaragupta. Obverse legend: "Kumaragupta, who has destroyed his enemies and protected his client kings, is victorious over his foes".

Among the Gupta kings, Kumaragupta issued the largest varieties of coins. His 628 coins in the Bayana hoard belong to 14 different types.

The varieties of his coins include the following:

Some repoussé coins discovered at Khairatal have also been attributed to Kumaragupta by earlier scholars. These coins depict a garuda with outstretched wings and legend Mahendraaditya. The other side is blank. It is likely that these coins were not issued by Kumaragupta or any other Gupta ruler.

At least 18 inscriptions from Kumaragupta's reign are available. All of these inscriptions were issued by private individuals rather than the Gupta royals, and most of them aim to record religious matters. Nevertheless, they provide valuable historical information, such as a genealogy of the Gupta kings, dates, locations of places in the Gupta empire, and names of royal officers. The earliest extant Gupta inscriptions from the Bengal region were issued during Kumaragupta's reign.

A Linga dedicated in Gupta Era 117, during the reign of Kumaragupta I, from Karamdanda, District Gonda, Uttar Pradesh. Lucknow Museum.

All content from Kiddle encyclopedia articles (including the article images and facts) can be freely used under Attribution-ShareAlike license, unless stated otherwise. Cite this article:
Kumaragupta I Facts for Kids. Kiddle Encyclopedia.