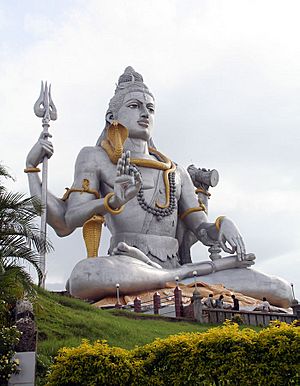 A statue of Shiva

Shaivism is a form of Hinduism, which sees Shiva as the most important deity. In practice, there are different branches of Shaivism. Shaivism is common in India, Nepal and Sri Lanka. It can also be found in Malaysia, Singapore, and Indonesia.

All content from Kiddle encyclopedia articles (including the article images and facts) can be freely used under Attribution-ShareAlike license, unless stated otherwise. Cite this article:
Shaivism Facts for Kids. Kiddle Encyclopedia.