Kids Encyclopedia Facts
This page is about the divine bird in Hindu and Buddhist mythology. For other uses, see Garuda (disambiguation). 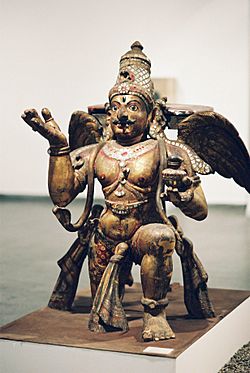 Garuda, the Vahana of Lord Vishnu

The Garuda (Sanskrit: Garuḍa गरुड, eagle; Pāli Garuḷa) is a large mythical bird or bird-like creature that appears in both Hindu and Buddhist mythology.

Garuda with the head and wings of eagle and sometimes with the rest of his body like that of a man is called the king of birds and he is also the carrier of god Vishnu.

Garuda is also known by another name Vainateya, son of Vinata and Sri Kashyapa prajapathi. Garuda is separately worshipped on the day of Garuda panchami, fifth day of lunar month after ashasa amavasya. His brother Anura(Arun) is the charioteer of God Suryanarayana.

All content from Kiddle encyclopedia articles (including the article images and facts) can be freely used under Attribution-ShareAlike license, unless stated otherwise. Cite this article:
Garuda Facts for Kids. Kiddle Encyclopedia.