This subspecies is the National animal of Sri Lanka and is native to the island country. It once lived over the entire island. They now live in the dry zones in the north, east, and southeast. These zones are mainly dry deciduous woodland, scrubland, grassland, and marshes. There is a small group in the rainforest.

Sri Lankan elephants are sometimes working animals. They carry timber, transport passengers, and participate in public events like the Procession of Buddha's Tooth. They were many of them in the past. They were aggressively hunted.

In modern times, these elephants can be seen in Sri Lanka's national parks and elephant orphanages. They have been declared an endangered species, and are protected by law. Killing one carries the death penalty.

The Asian elephant's highest body point is on its head. The tip of their trunk is used like a finger. Their back is curved upward or level.

Their ears are smaller than those of the African elephant. Their feet have more nails than those of African elephants. They have five nails on each front foot, and four on each back foot. Few Sri Lankan male elephants develop tusks, and females have no tusks. Their skin color is darker than that of the two other Asian subspecies. They may have large patches of skin color loss (depigmentation) on ears, face, trunk, and tummy.

Sri Lankan elephants are the largest subspecies of the Asian elephant. Their shoulder height is between 6 and 11 ft. They weigh between 4,000 and 12,000 lb.

Like humans, apes, and dolphins, they have a large and well developed brain. They are very smart. Elephants have the largest brain of all land animals. They have very good memories. They can remember places, people, and events from long in the past.

The Sri Lankan elephant was once widely distributed across Sri Lanka. Over the past two hundred years however, human land use and development has forced the elephant from the wet and fertile regions of the southwest to the drier regions of the north, east, and southeast. These drier areas are mainly deciduous woodland, scrub, grassland, and marshes. 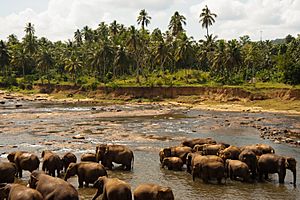 Elephants bathing in the Pinnawala Elephant Orphanage in Sri Lanka

Like the two other subspecies of Asian elephants, Sri Lankan elephants live in groups of individuals that are related by blood. The group is led by a matriarch. She is usually the oldest and most experienced female in the group.

Immature male elephants are members of the group, but once they reach sexual maturity, the females drive them out of the group. These males may then join bachelor groups or live on their own. 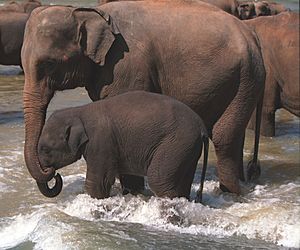 A mature male elephant is a bull, and a mature female elephant is a cow. Their offspring are called calves. Calves suckle for 2 to 5 years, and develop close ties with their mothers. All cows in the group, clan, or herd will help in different ways to raise and protect the calves. 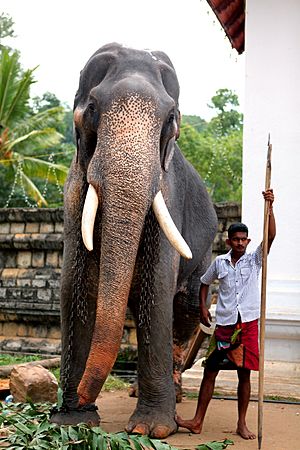 Male elephant being prepared for a festival

When males reach sexual maturity in their early teens, the matriarch and other female members of the group will chase him away. These males will not be able to mate with their relatives. The babies of such close unions will likely be inferior elephants.

Young males often form bachelor groups. Only a very few of Sri Lankan male elephants develop tusks. Female do not have tusks. Males become more solitary as they grow older. Adult males join females only for mating. Males do not help in raising the young.

Sri Lankan elephants are both browsers and grazers. They walk along and eat, but also stand still and eat what they can reach.

Adult elephants eat 300-400 lb. of food per day to support their bulk. These elephants will eat for up to 16 hours a day to meet their need for food. They drink from 25 to 50 gallons of water daily. 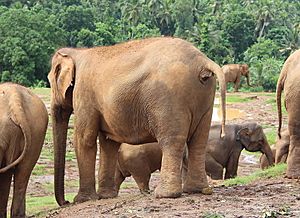 The elephants use less than 50% of the food they eat. They produce huge amounts of manure. They defecate about 16–18 times a day, and produce about 220 lbs. of dung.

In the wild, this manure carries and spreads the undigested seeds in the elephant's diet. Their manure is a source of food for insects and birds.

Asian male elephants reach sexual maturity during their early teens. At that time, they enter an annual phase called "musth". This is a period when they become sexually aggressive. They will fight other males to mate with a female. 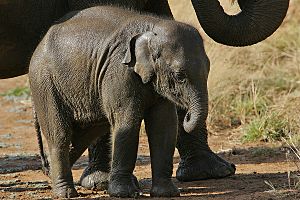 Once a male and female have successfully mated, a baby elephant called a calf develops in the mother's womb. The calf is born after an 18 to 22 month period. At birth, the calf weighs about 220 lb. Twins are rare.

Once a mother gives birth, she usually does not breed again until the first calf is weaned. This results in a birth interval of 4 to 5 years. Mothers remain with their herd, but mature males are driven away. 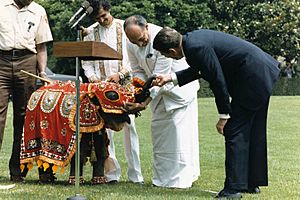 President Jayewardene of Sri Lanka presents a baby elephant to President Reagan and the American people on the south lawn of the White House in 1984.

In the distant past, Sri Lankan elephants numbered in the hundreds of thousands. They lived in all zones of the island. They were aggressively hunted by Sri Lankans, other Asians, and Europeans.

In 2014, there was an estimated 4,000 elephants living on Sri Lanka. The Sri Lankan elephant is protected under the Fauna and Flora Protection Ordinance of Sri Lanka (FFPO), and killing it carries the death penalty.

Sri Lankan elephants are important to the economic and cultural life of Sri Lanka. Some are working elephants. They are used to carry timber. These elephants are losing their jobs because tractors are replacing them.

Elephants can be seen in protected areas and national parks. These elephants attract tourists. This trade improves the economy and the lives of Sri Lankans. 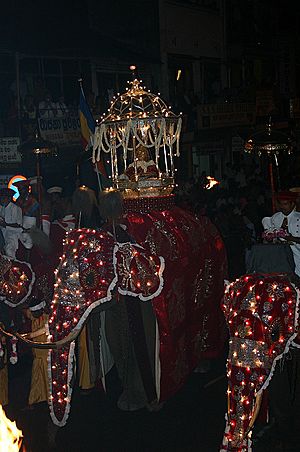 The elephant has always been held in great cultural esteem in Sri Lanka. Rajah, a Sri Lankan elephant with tusks that nearly touched the ground, was declared a national treasure in 1985.

Sri Lankan elephants participate in ceremonies, processions, and other public events. The Esala Perahera (the festival of Buddha's tooth) is held annually in Kandy, Sri Lanka. It is thought to date to the 3rd century BC. Elephants lead the procession, bearing the sacred tooth.

Sri Lankan elephants face the same threats to survival as other Asian elephant subspecies do: the clearing of forests to make way for farms and other human developments has destroyed their living areas.

Conflicts between elephants and humans have been the result. These conflicts have led to the death of both elephants and humans, and the destruction of property. The situation is complicated by the elephant's taste for crops grown by humans such as sugar cane, bananas, and other fruits.

In 1997, about 126 wild elephants were lost as a result of these conflicts. Conflict between government troops and a terrorist group called the Tamil Tigers has also put elephants at risk.

All content from Kiddle encyclopedia articles (including the article images and facts) can be freely used under Attribution-ShareAlike license, unless stated otherwise. Cite this article:
Sri Lankan elephant Facts for Kids. Kiddle Encyclopedia.