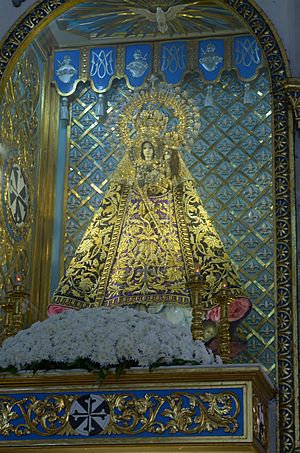 The solid ivory image of Our Lady of Manaoag in her imperial regalia. Genuine ivory is held more valuable than gold among Santero artisans. Pangasinan, Philippines.

Ivory is a hard, white material from the tusks (traditionally elephant's) and teeth of animals, that can be used in art or manufacturing. It consists mainly of dentine, one of the physical structures of teeth and tusks. The chemical structure of the teeth and tusks of mammals is the same, regardless of the species of origin.

The trade in certain teeth and tusks other than elephant is well established and widespread; therefore, "ivory" can correctly be used to describe any mammalian teeth or tusks of commercial interest which are large enough to be carved. It has been valued since ancient times for making a range of items, from ivory carvings to false teeth, fans, dominoes and joint tubes.

Elephant ivory is the most important source, but ivory from mammoth, walrus, hippopotamus, sperm whale, killer whale, narwhal and wart hog are used as well. Elk also have two ivory teeth, which are believed to be the remnants of tusks from their ancestors.

The national and international trade in ivory of threatened species such as African and Asian elephants is illegal.

Both the Greek and Roman civilizations practiced ivory carving to make large quantities of high value works of art, precious religious objects, and decorative boxes for costly objects. Ivory was often used to form the white of the eyes of statues. There is some evidence of either whale or walrus ivory used by the ancient Irish. Solinus.

The Chinese have long valued ivory for both art and utilitarian objects. Chinese craftsmen carved ivory to make many beautiful and useful items. The Buddhist cultures of Southeast Asia, traditionally harvested ivory from their domesticated elephants. Ivory was prized for containers due to its ability to keep an airtight seal. It was also commonly carved into elaborate seals utilized by officials to "sign" documents and decrees by stamping them with their unique official seal.

The Syrian and North African elephant populations were reduced to extinction, probably due to the demand for ivory in the Classical world.

All content from Kiddle encyclopedia articles (including the article images and facts) can be freely used under Attribution-ShareAlike license, unless stated otherwise. Cite this article:
Ivory Facts for Kids. Kiddle Encyclopedia.