The Hunt Museum (Irish: Iarsmalann Hunt) is a museum in the city of Limerick, Ireland. The Hunt Museum holds a personal collection donated by the Hunt family, it was originally situated in the University of Limerick, before being moved to its present location in the Georgian Custom House in 1997. The Custom House is situated on Rutland Street on the banks of the River Shannon at its confluence with the Abbey River. Among the museum's collection are works by notable artists and designers such as Pablo Picasso, Jack B. Yeats, and Sybil Connolly as well as distinctive historical items such as the O'Dea Mitre and Crozier.

As antique dealers and advisors to collectors, John and Gertrude Hunt built a thriving business and also began to acquire pieces that reflected their own interests and curiosity rather than for commercial purposes. During the latter stages of John's life, they became increasingly aware of the scale of their collection and wished that it would remain intact, so they began to search for a permanent home for it. Fortunately they met Professor Patrick Doran of the National Institute of Higher Education (now University of Limerick) and Dr Edward Walsh, the Institute's President, who agreed to house a substantial part of the collection on a temporary basis. The Hunt Museum opened there in 1978 in an exhibition room with the display designed by architect Arthur Gibney.

During this period the Irish Government had declined the offer of the Hunt's collection, so the requirement to find a suitable home and owner to take responsibility for the artifacts became more urgent. The Hunt Museums Trust was established in 1974 to hold the Collection and the property at Craggaunowen (a 16th-century four-storey tower house, typical of late medieval Ireland, purchased and restored by John and Gertrude Hunt) in trust on behalf of the people of Ireland. The trust established The Hunt Museum Ltd., the sole purpose of which was the establishment of a permanent home for the museum. Under the chairmanship of Dr Tony Ryan, this company provided the necessary energy to create the museum as we see it today. A public private partnership involving the University of Limerick, Shannon Development, Limerick Corporation and the Department of Arts, Heritage, the Gaeltacht and the Islands, linked with local business interests secured the historic 18th-century former Customs House in Limerick city together with the funds to restore and renovate the building to international museum standards. The museum was officially opened by the Taoiseach John Bruton on 14 February 1997. It was a moment of great celebration for all concerned but, unfortunately, neither John nor Gertrude Hunt had lived to realise their dream. The museum stands as a monument to their enthusiasm, curiosity and generosity. 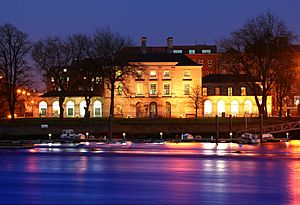 Nigh time view of the front of the Custom House from Clancy's Strand.

The Custom House is regarded as the most distinguished eighteenth century building in Limerick and it is also rather unusual in comparison to other Georgian buildings in the city in that the exterior of the building is limestone rather than red brick. It is an elegant Palladian-style building designed by the Italian architect, Davis Ducart, in 1765. Both the 'Captain's Room' and 'Red Staircase' are elegant examples of Georgian architecture within the building and are testament to the optimism that the city experienced during the period of development and expansion in the late 18th century. Ducart also designed several other Palladian-style buildings in Ireland including Castletown Cox in Co. Kilkenny and Florence Court in Co. Fermanagh. The Limerick Custom House was the administrative centre for the Revenue Commissioners (including Customs and Excise) in Limerick and it was also the home of the Customs Collector in the eighteenth century. In the 1840s with the introduction of a new postal system a Penny Post Office was opened in the Custom House.

The Office of Public Works (OPW) undertook the major restoration and refurbishment of the building completing it in 1996. The Custom House opened as The Hunt Museum on 14 February 1997. The anniversary of the opening of The Hunt Museum is celebrated annually as 'Open Day' with free admission, talks, tours, workshops and other activities.

The Hunt Museum holds about 2,500 different artifacts, both from Ireland and abroad. The oldest pieces are from Stone-Age Ireland and ancient Egypt. The collection includes the Antrim Cross (an early 9th-century cast bronze and enamel cross), dresses by Irish designer Sybil Connolly, drawings by Picasso and a bronze horse once thought to be a design by Leonardo da Vinci for a large monument. The bronze horse is similar to the Budapest horse, but its provenance was disproven in 2009. Some of the Hunt collection is also on display at the nearby Craggaunowen in County Clare, which was also greatly contributed to by John and Gertrude Hunt.

John Hunt was extremely interested in early Christian art and artifacts and he collected them widely, so the museum collection held many religious items from rosary beads to statues of varying sizes, from not just Ireland but from around Europe. The Museums 'Treasury Room' houses a great number of these items and among the artifacts in this room are the beautiful Arthur Cross and Arthur Chalice. Also found in the collection were significant medieval Christian pieces such as the Antrim Cross, the Cashel Bell, and the Hohenzollern Crucifix. 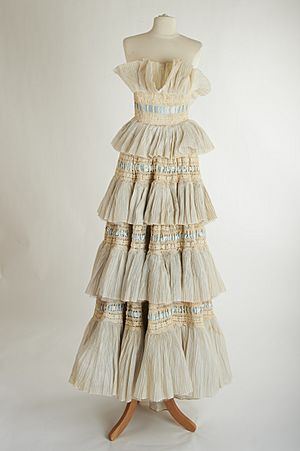 Included in the plan to house the Hunt collection in the custom house was also an idea for a purpose built modern gallery space. It was completed as a part of the renovation of the Custom House and is regularly used for temporary exhibitions that accompany the permanent collection.

In 2011 a lifesize model of a horse, painted by young people aged 10–18 was placed outside the front of the building. This was joined by a second one in 2012. The models are made of fibreglass, and are taken inside at night. The art installation was inspired by the song Horse Outside by the group The Rubberbandits.

All content from Kiddle encyclopedia articles (including the article images and facts) can be freely used under Attribution-ShareAlike license, unless stated otherwise. Cite this article:
Hunt Museum Facts for Kids. Kiddle Encyclopedia.