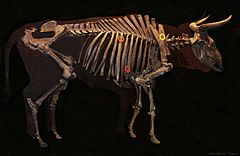 The Aurochs, or urus, (Bos primigenius) was a large species of cattle. The aurochs used to be common in Europe. It is extinct now. It was a wild animal, not a domesticated animal. The extinct aurochs/urus is a not the same species as the wisent (the European bison).

According to the Paleontologisk Museum, University of Oslo, aurochs developed in India some two million years ago, came into the Middle East and farther into Asia, and reached Europe about 250,000 years ago. People once thought that they were a different species from modern European cattle (Bos taurus). Today, people think that aurochs and modern cattle are the same species.

Modern cattle have become much smaller than their wild ancestors: the height of a large domesticated cow is about 1.5 meters (5 feet, 15 hands), while aurochs were about 1.75 meters (5.75 feet, 17 hands).

Aurochs also had several features not often seen in modern cattle, such as lyre-shaped horns set at a forward angle, a pale stripe down the spine, and different color according to the gender. Males were black with a pale stripe down the spine, while females and calves were reddish (these colours are still found in a few domesticated cattle breeds, such as Jersey cattle). Aurochs were also known to have very aggressive behaviour, and killing one was seen as an act of courage in ancient cultures.

All content from Kiddle encyclopedia articles (including the article images and facts) can be freely used under Attribution-ShareAlike license, unless stated otherwise. Cite this article:
Aurochs Facts for Kids. Kiddle Encyclopedia.