The striped hyaena (Hyaena hyaena) is a widespread small carnivore. It is native to North and East Africa, the Middle East, the Caucasus, Central Asia and the Indian subcontinent. It is listed by the IUCN as near threatened, and the global population may be under 10,000 mature individuals. It is persecuted, and its prey base is declining.

It is the smallest of its genus and has many primitive viverrid characteristics which are lost in the larger species. For example, it has a smaller and less specialised skull.

It is mainly a scavenger, but large individuals may kill their own prey. Attacks on humans are rare, but do happen. The striped hyena is a monogamous animal, with both males and females assisting one another in raising their cubs. A nocturnal animal, the striped hyena only comes out in complete darkness, and is quick to return to its lair before sunrise. It has a habit of feigning death when attacked. It has also been known to stand its ground against larger predators such as leopards in disputes over food.

The striped hyaena features prominently in Middle Eastern and Asian folklore. It is mentioned in the Hebrew Bible, where it is referred to as tzebua or zevoa, though the species is absent in some English translations. 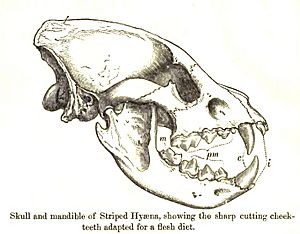 The striped hyena is the second largest hyena species, being intermediate in size to the spotted hyena and the brown hyena. Its skull is not as large as that of the brown hyena, and its dentition less robust, indicating more generalised dietary adaptations. It is a medium sized animal with a downward sloping back and a roundish head with a pointed muzzle and pointed ears. It is generally pale grey or beige in colour with a black patch on the throat. It sports 5–9 distinct vertical stripes on the flanks, with clearer black transverse and horizontal stripes on the legs. A seasonal dimorphism in pelt colour is noticeable; the stripes of the summer coat are much blacker and more well defined than in the winter coat. The mid-dorsal line has a mane which can be held erect, making it appear 38% bigger, which it does when it feels threatened. The mane serves as a signalling device during social interactions. It has a long, bushy tail which is black and white in colour, with long, coarse hair. Four toes with short, blunt, non-retractable claws are present on the feet. Males weigh between 26–41 kilograms (57–90 pounds), while females weigh 26–34 kg (57–75 lb). Excluding the tail, total body length varies between 1.0 and 1.15 m. Shoulder height is between 0.66 and 0.75 m. Striped hyenas have scent glands resembling fairly large, hairless pouches which are located at the opening of the anus.

Litter sizes in the wild vary from 1–4 throughout the year with an average of 3. In captivity, average litter size is 1–5. Intensive digging behaviour by the female precedes parturition, and is often followed by a day of postnatal oestrus three weeks later. The cubs are born blind, with closed ear canals. Fur colour at this stage ranges from white to grey with clear black stripes. The cubs open their eyes after 7–8 days, while the teeth will erupt after 3 weeks. Solid food is ingested after a month. Weaning ages vary from eight weeks to 12 months. Both the male and female partake in feeding the cubs. The age of sexual maturity has been reported to be inconsistent. In Tashkent zoo, a female was four years old when she gave birth to her first litter, while 15 month old wild individuals in Israel were reported to bear three large embryos. 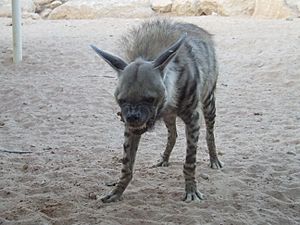 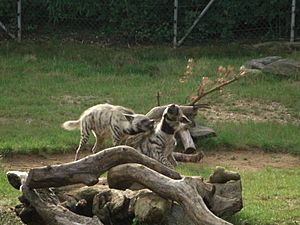 Striped hyenas are more solitary than spotted and brown hyenas, having smaller home ranges. In all subspecies, typical group sizes are 1–2, although groups of seven have been reported in Libya. Hyenas in Israel are generally solitary, though they may occasionally be seen congregating at carcasses. Central Asian striped hyenas are reported to be monogamous. Unlike the spotted hyena, there is little evidence of territorial behaviour. In the Serengeti, the home range sizes of two individuals were 44 km² and 72 km² (17 and 28 mi²) respectively, while a home-range size for a single female in the Negev desert was reported to be approximately 61 km² (24 mi²). 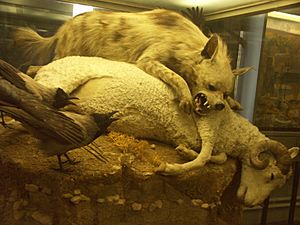 Unlike the spotted hyena, the striped hyena is primarily a scavenger, and will readily consume carrion and the remains of kills of other predators, using its powerful jaws to gnaw and crush bones. It does occasionally feed on live prey, though it has been suggested that only individuals from the three larger subspecies present in Northwest Africa, the Middle East and India kill large prey animals. There is no evidence that the smaller subspecies present in east Africa and the Arabian peninsula attack large herbivores. Striped hyenas in Turkmenistan have been recorded to feed on large numbers of tortoises, though they have also been observed hunting wild boar, kulan and porcupine. In the Caucasus, grasshoppers are their primary food source.

Striped hyenas will supplement their carnivorous diet with vegetation. Seasonal abundance of oil willow fruits is an important contribution to their diet in Uzbekistan and Tajikistan. In Israel hyenas feed on fruits, particularly dates and melons. Striped hyena are able to drink varying qualities of water, from fresh water, soda and salt water. A diet of melons may also fulfill its liquid requirements. Striped hyenas have been observed feeding at landfills.

The striped hyenas habit of feasting on the kills of other predators inevitably results in some form of confrontation, ranging from threatening posturing to outright violence. In Africa the striped hyena is invariably dominated in feeding disputes against the larger apex carnivores such as lions and spotted hyena (though hyena biologist Hans Kruuk has stated that there does appear to be some form of 'attraction' between the two hyenid species). Disputes against lone predators such as leopards and cheetahs are more difficult to predict, the outcome usually depending on who intimidates who first. In India and the Middle East, the striped hyena will sometimes enter into conflict with wolves. Though individually stronger, the hyena's solitary nature puts it at a disadvantage against the more social wolf. Striped hyenas in India may dominate very young tigers, but generally wait until an adult is gone to scavenge from their kills. Hyena remains have been found in the stomachs of mugger crocodiles.

Five subspecies, differentiated by pelage and morphometric differences have been provisionally identified.

H. h. sultana and H. h. dubbah are smaller than the three more northern subspecies. Lebanese striped hyenas are reported to have a reddish base coat colour, while those in the Arabian peninsula have yellow marks below the eyes, and their manes are mixed grey and black rather than completely black.

This division into subspecies is not accepted by all authorities. Mammal Species of the World lists them (as well as many other names) as synonyms of Hyaena hyaena.

The effects striped hyenas have on livestock vary according to region. Lebanon reports very few attacks, with some accounts describing how hyenas crossed through pastures without even spooking the grazing herds, while reports from Turkmenistan indicate that striped hyenas are more serious livestock predators than wolves. Surveys indicate that goats, sheep, dogs, and poultry are the most commonly recorded livestock killed by striped hyenas. There are records of hyenas eating larger animals, though it is unclear if said cases were truly kills or scavenging mistakenly identified as kills. The age and health of targeted individuals of larger livestock animals are unclear, though records suggest that attacks typically occur at low frequencies. Livestock damage reputedly occurs in greater frequencies in Egypt, Ethiopia, India, Iraq, and possibly Morocco. Dogs are the most commonly targeted animals in Turkmenistan and India, whereas dogs, sheep and other small domestic animals are reportedly killed in the Caucasus region. Reports from the 1950s in Iraq indicate that horses and donkeys may be attacked. Dogs, sheep and goats are occasionally at risk in Africa.

Melon fields and date palm plantations in Israel and Egypt are occasionally raided by striped hyenas, while watermelon and honeydew plantations are often targeted in in Turkmenistan.

All content from Kiddle encyclopedia articles (including the article images and facts) can be freely used under Attribution-ShareAlike license, unless stated otherwise. Cite this article:
Striped hyena Facts for Kids. Kiddle Encyclopedia.