Honeydew, also known as Honey Melon, is a type of melon in the cultivar group muskmelon. Cucumis melo Inodorus group, which includes crenshaw, casaba, Persian, winter, and other mixed melons.

A honeydew has a round to slightly oval shape, typically 15–22 cm (5.9–8.7 in) long. It generally ranges in weight from 1.8 to 3.6 kg (4.0 to 7.9 lb). The flesh is usually pale green in color, while the smooth peel ranges from greenish to yellow. Like most fruit, honeydew has seeds. The inner flesh is eaten, often for dessert, and honeydew is commonly found in supermarkets across the world alongside cantaloupe melons and watermelons. In California, honeydew is in season from August until October.

This fruit grows best in semiarid climates and is harvested based on maturity, not size. Maturity can be hard to judge, but it is based upon the ground color ranging from greenish white (immature) to creamy yellow (mature). Quality is also determined by the honeydew having a nearly spherical shape with a surface free of scars or defects. A honeydew should also feel heavy for its size and have a waxy rather than a fuzzy surface. 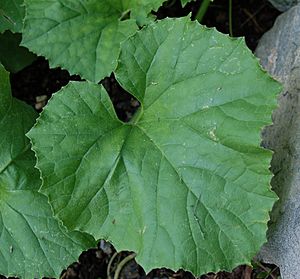 The leaf of a honeydew

"Honeydew" is in fact the American name for the White Antibes cultivar which has been grown for many years in southern France and Algeria.

In China, honeydews are known as Bailan melons. They are famous locally near Lanzhou, the capital city of Gansu province in China's northwest.

All content from Kiddle encyclopedia articles (including the article images and facts) can be freely used under Attribution-ShareAlike license, unless stated otherwise. Cite this article:
Honeydew (melon) Facts for Kids. Kiddle Encyclopedia.