Kids Encyclopedia Facts
Not to be confused with Bhoja.

Mihira Bhoja (c. 836–885 CE) or Bhoja I was a ruler of the Gurjara-Pratihara dynasty of India. He succeeded his father Ramabhadra. Bhoja was a devotee of Vishnu and adopted the title of Ādivarāha which is inscribed on some of his coins. One of the outstanding political figures of India in ninth century, he ranks with Dhruva Dharavarsha and Dharmapala as a great general and empire builder.

At its height, Bhoja's empire extended to Narmada River in the South, Sutlej River in the northwest, and up to Bengal in the east. It extended over a large area from the foot of the Himalayas up to the river Narmada and included the present district of Etawah in Uttar Pradesh.

During his reign, the capital was in Kannauj (present-day Uttar Pradesh), during his period Kannauj was referred as Panchala.

He was a bitter enemy of the Arab invaders who, according to an Arab chronicler, Sulaiman, maintained a large army and had a fine cavalry.

When Mihira Bhoja started his career reverses and defeats suffered by his father Ramabhadra had considerably lowered the prestige of the Royal Gurjara Pratihara family. He invaded the Pala Empire of Bengal, but was defeated by Devapala. He then launched a campaign to conquer the territories to the south of his empire and was successful. After Devapala's death, Bhoja defeated the Pala King Narayanapala and the Rashtrakuta ruler Krishna II. He gradually rebuilt the empire by conquest of territories in Rajasthan, Gujarat and Madhya Pradesh. The Chandelas of Bundelkhand acknowledged his suzerainty. Besides being a conqueror, Bhoja was a great diplomat. 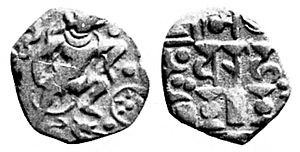 The Adivaraha drammas, coinage of the Pratihara ruler Bhoja I who is known by the same title, 850-900 CE. Obv: Boar, incarnation of Vishnu, and solar symbol. Rev: "Traces of Sasanian type". Legend: Srímad Ādi Varāha "The fortunate primaeval boar", a title also known to have been used for king Bhoja I. 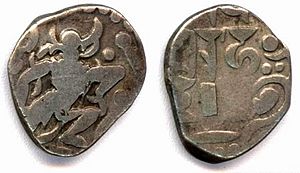 Mihira Bhoja's epithet was Srimad-Adivaraha (the fortunate primeval boar incarnation of Vishnu) and therefore there is a broad agreement amongst the scholars on the attribution of adivaraha dramma billon coins to him. These coins have a depiction of Adivaraha on the obverse.

All content from Kiddle encyclopedia articles (including the article images and facts) can be freely used under Attribution-ShareAlike license, unless stated otherwise. Cite this article:
Mihira Bhoja Facts for Kids. Kiddle Encyclopedia.