Major General Sir Alexander Cunningham KCIE CSI (23 January 1814 – 28 November 1893) was a British army engineer with the Bengal Engineer Group who later took an interest in the history and archaeology of India. In 1861, he was appointed to the newly created position of archaeological surveyor to the government of India; and he founded and organised what later became the Archaeological Survey of India.

He wrote numerous books and monographs and made extensive collections of artefacts. Some of his collections were lost, but most of the gold and silver coins and a fine group of Buddhist sculptures and jewellery were bought by the British Museum in 1894.

He was also the father of mathematician Allan Cunningham. 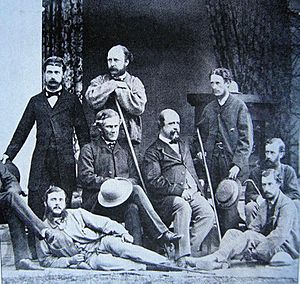 Cunningham (fourth from the right) at an unknown date

Cunningham was born in London in 1814 to the Scottish poet Allan Cunningham (1784–1842) and his wife Jean née Walker (1791–1864). Along with his older brother, Joseph, he received his early education at Christ's Hospital, London. Through the influence of Sir Walter Scott, both Joseph and Alexander obtained cadetships at the East India Company's Addiscombe Seminary (1829–31), followed by technical training at the Royal Engineers Estate at Chatham. Alexander joined the Bengal Engineers at the age of 19 as a Second Lieutenant and spent the next 28 years in the service of British Government of India. Soon after arriving in India on 9 June 1833, he met James Prinsep. He was in daily communication with Prinsep during 1837 and 1838 and became his intimate friend, confidant and pupil. Prinsep passed on to him his lifelong interest in Indian archaeology and antiquity.

From 1836 to 1840 he was ADC to Lord Auckland, the Governor-General of India. During this period he visited Kashmir, which was then not well explored. He finds mention by initials in Up the Country by Emily Eden. 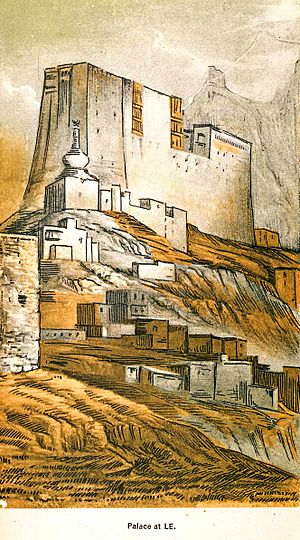 In 1841 Cunningham was made executive engineer to the king of Oudh. In 1842 he was called to serve the army in thwarting an uprising in Bundelkhand by the ruler of Jaipur. He was then posted at Nowgong in central India before he saw action at the Battle of Punniar in December 1843. He became engineer at Gwalior and was responsible for constructing an arched stone bridge over the Morar River in 1844–45. In 1845–46 he was called to serve in Punjab and helped construct two bridges of boats across the Beas river prior to the Battle of Sobraon.

In 1846, he was made commissioner along with P. A. Vans Agnew to demarcate boundaries. Letters were written to the Chinese and Tibetan officials by Lord Hardinge, but no officials joined. A second commission was set up in 1847 which was led by Cunningham to establish the Ladakh-Tibet boundary, which also included Henry Strachey and Thomas Thomson. Henry and his brother Richard Strachey had trespassed into Lake Mansarovar and Rakas Tal in 1846 and his brother Richard revisited in 1848 with botanist J. E. Winterbottom. The commission was set up to delimit the northern boundaries of the Empire after the First Anglo-Sikh War concluded with the Treaty of Amritsar, which ceded Kashmir as war indemnity expenses to the British. His early work Essay on the Aryan Order of Architecture (1848) arose from his visits to the temples in Kashmir and his travels in Ladakh during his tenure with the commission. He was also present at the battles of Chillianwala and Gujrat in 1848–49. In 1851, he explored the Buddhist monuments of Central India along with Lieutenant Maisey and wrote an account of these.

In 1856 he was appointed chief engineer of Burma, which had just been annexed by Britain, for two years; and from 1858 served for three years in the same post in the North-Western Provinces. In both regions, he established public works departments. He was therefore absent from India during the Rebellion of 1857. He was appointed Colonel of the Royal Engineers in 1860. He retired on 30 June 1861, having attained the rank of Major General.

Cunningham had taken a keen interest in antiquities early in his career. Following Jean-Baptiste Ventura, general of Ranjit Singh, who, inspired by the French explorers in Egypt, had excavated the bases of pillars to discover large stashes of Bactrian and Roman coins, excavations became a regular activity among British antiquarians.

In 1834 he submitted to the Journal of the Asiatic Society of Bengal an appendix to James Prinsep's article on the relics in the Mankiala stupa. He had conducted excavations at Sarnath in 1837 along with Colonel F. C. Maisey and made careful drawings of the sculptures. In 1842 he excavated at Sankassa and at Sanchi in 1851. In 1854 he published The Bhilsa Topes, an attempt to establish the history of Buddhism based on architectural evidence.

By 1851, he also began to communicate with William Henry Sykes and the East India Company on the value of an archaeological survey. He provided a rationale for providing the necessary funding, arguing that the venture

... would be an undertaking of vast importance to the Indian Government politically, and to the British public religiously. To the first body it would show that India had generally been divided into numerous petty chiefships, which had invariably been the case upon every successful invasion; while, whenever she had been under one ruler, she had always repelled foreign conquest with determined resolution. To the other body it would show that Brahmanism, instead of being an unchanged and unchangeable religion which had subsisted for ages, was of comparatively modern origin, and had been constantly receiving additions and alterations; facts which prove that the establishment of the Christian religion in India must ultimately succeed. 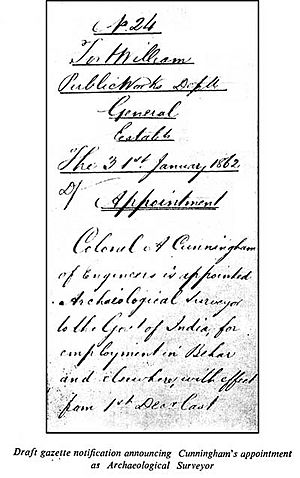 Following his retirement from the Royal Engineers in 1861, Lord Canning, then Viceroy of India, appointed Cunningham archaeological surveyor to the Government of India. He held this appointment from 1861 to 1865, but it was then terminated through lack of funds.

Most antiquarians of the 19th century who took interest in identifying the major cities mentioned in ancient Indian texts did so by putting together clues found in classical Graeco-Roman chronicles and the travelogues of travellers to India such as Xuanzang and Faxian. Cunningham was able to identify some of the places mentioned by Xuanzang and counted among his major achievements the identification of Aornos, Taxila, Sangala, Srughna, Ahichchhatra, Bairat, Sankisa, Shravasti, Kaushambi, Padmavati, Vaishali, and Nalanda. Unlike his contemporaries, Cunningham would also routinely confirm his identifications through field surveys. The identification of Taxila, in particular, was made difficult partly due to errors in the distances recorded by Pliny in his Naturalis Historia which pointed to a location somewhere on the Haro River, two days march from the Indus. Cunningham noticed that this position did not tally with the itineraries of Chinese pilgrims and in particular, the descriptions provided by Xuanzang. Unlike Pliny, these sources noted that the journey to Taxila from the Indus took three days and not two and therefore, suggested a different location for the city. Cunningham's subsequent explorations in 1863–64 of a site at Shah-dheri convinced him that his hypothesis was correct.

Now as Hwen Thsang, on his return to China, was accompanied by laden elephants, his three days' journey from Takhshasila [sic] to the Indus at Utakhanda, or Ohind, must necessarily have been of the same length as those of modern days, and, consequently, the site of the city must be looked for somewhere in the neighbourhood of Kâla-ka-sarâi. This site is found near Shah-dheri, just one mile to the north-east of Kâla-ka-sarâi, in the extensive ruins of a fortified city, around which I was able to trace no less than 55 stupas, of which two are as large as the great Manikyala tope, twenty-eight monasteries, and nine temples.

After his department was abolished in 1865, Cunningham returned to England and wrote the first part of his Ancient Geography of India (1871), covering the Buddhist period; but failed to complete the second part, covering the Muslim period. During this period in London he worked as director of the Delhi and London Bank. In 1870, Lord Mayo re-established the Archaeological Survey of India, with Cunningham as its director-general from 1 January 1871. Cunningham returned to India and made field explorations each winter, conducting excavations and surveys from Taxila to Gaur. He produced twenty-four reports, thirteen as author and the rest under his supervision by others such as J. D. Beglar. Other major works included the first volume of Corpus Inscriptionum Indicarum (1877) which included copies of the edicts of Ashoka, The Stupa of Bharhut (1879) and the Book of Indian Eras (1883) which allowed the dating of Indian antiquities. He retired from the Archaeological Survey on 30 September 1885 and returned to London to continue his research and writing.

Cunningham assembled a large numismatic collection, but much of this was lost when the steamship he was travelling in, the Indus, was wrecked off the coast of Ceylon in November 1884. The British Museum, however, obtained most of the gold and silver coins. He had suggested to the Museum that they should use the arch from the Sanchi Stupa to mark the entrance of a new section on Indian history. He also published numerous papers in the Journal of the Asiatic Society and the Numismatic Chronicle.

Two of Cunningham's brothers, Francis and Joseph, became well known for their work in British India; while another, Peter, became famous for his Handbook of London (1849).

Cunningham died on 28 November 1893 at his home in South Kensington and was buried at Kensal Green Cemetery, London. His wife had predeceased him. He was survived by his two sons.

All content from Kiddle encyclopedia articles (including the article images and facts) can be freely used under Attribution-ShareAlike license, unless stated otherwise. Cite this article:
Alexander Cunningham Facts for Kids. Kiddle Encyclopedia.