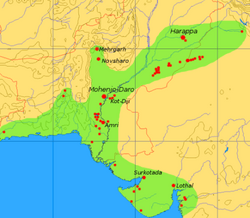 Size and major sites of the Indus Valley civilization 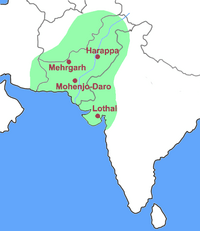 The extent of Indus Valley civilization 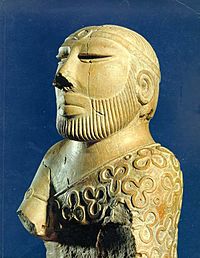 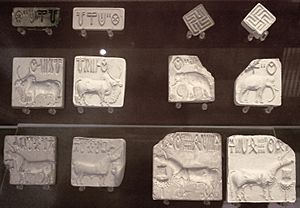 Seals found at sites of the Indus Valley civilization

The Indus Valley civilization was an ancient civilization in the Indian subcontinent. It was discovered by archaeologists in the 1920s. It developed along the Indus River and the Ghaggar-Hakra River, in the area of modern Pakistan and north-west India and Afghanistan. It started during the Bronze Age. The height of its development was between 2600 and 1900 BC. Including the civilizations directly before and directly afterward, it may have lasted from the 33rd to the 14th century BC.

The Indus Valley civilization covered a large area - from Balochistan (Pakistan) to Gujarat (Republic of India). The first city to be discovered by excavation (digging up) was Harappa and therefore this civilization is also known as 'Harappan Civilization'.

The bathrooms were attached to the rooms of the Harappa people. They were good builders. The ruins of the sight show that the harappa civilization people were skillful designers. Their buildings had two or sometimes more stories. One of the unique features of the city was its elaborate drainage system. A brick-lined drainage channel flowed along side every street. Removable bricks were placed at regular intervals for easy cleaning and inspection.

The harappans played dice games. The harappan traders used seals on the knots of the sacks to be transported to make sure that they were not opened during the journey. Nobody knows how to read their writing.

In 1842 Charles Masson wrote a book that mentioned the sites of Indus Valley Civilisation. Few people paid attention. Later, in 1921-22, John Marshall organised the first archaeological dig at Harappa. His work was continued by Mortimer Wheeler after the Second World War.

All content from Kiddle encyclopedia articles (including the article images and facts) can be freely used under Attribution-ShareAlike license, unless stated otherwise. Cite this article:
Indus Valley civilization Facts for Kids. Kiddle Encyclopedia.