History of Pakistan facts for kids 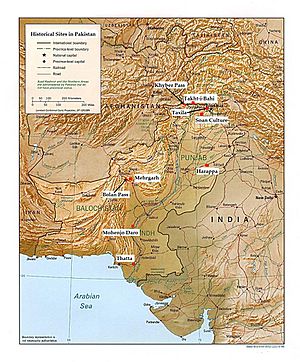 Pakistanis are a blend of their Harappan, Aryan, Persian, Greek, Saka, Parthian, Kushan, White Hun, Arab, Turkic, Afghan, and Mughal heritage. Waves of invaders and migrants settled down in Pakistan throughout the centuries, influencing the locals and being absorbed among them. Pakistan and the Republic of India have a distinct history and background. The region of Pakistan was never part of India except for 500+ years under the Muslims, and 100 years each under the Mauryans and the British. If any thing, it were the ancestors of Pakistanis who colonized north/northwest India, among them were Harappans, Aryans, Sakas, Kushans, White Huns, Turks, Afghans, and Mughals.

During the period 6000 BC and 2000 BC, late Neolithic culture and the start of the Bronze Age was taking shape in the Indus Valley of Ancient India.

About 7000 years before, by 5100 BC, early Neolithic culture had developed in ancient Pakistan. People had learned farming. They tended goats, lived in houses build of mud, and had learned to make baskets. Potteries were also made.

Around the 5th century BC, north-western parts of India faced invasion by the Achaemenid Empire and the Greeks of Alexander's army. Persian way of thinking, administration and lifestyle came to India. This influence became bigger during the Mauryan dynasty.

From around 520 BC, Achaemenid Empire’s Darius I ruled large part of northwestern parts of the Indian subcontinent. Then Alexander conquered these areas. Herodotus, a historian of that time has written that these areas were the richest areas of Alexander’s Empire. Achaemenid rule lasted about 186 years. In modern times, there are still traces of this Greek heritage to be found in parts of northwestern India.

Greco-Buddhism (also spelt as Græco-Buddhism) is a combination of culture of Greece and Buddhism. This mixture of cultures continued to develop for 800 long years, from 4th century BC until the 5th century AD. The area where it happened is modern day’s Afghanistan and Pakistan. This mixture of cultures influenced Mahayana Buddhism and spread of Buddhism to China, Korea, Japan and Tibet.

26 June 1564 Sheikh Ahmad was born who joined Naqshbandya Silsilah under the decipline of Khawaja Baqi Billah. He gave the philosophy of Wahdat-ul Wujud and Wahdat-ush Shuhud in his dedication to Islam.

The Indus Valley Civilization flourished from about 2600 BCE to 1900 BCE. It marked the beginning of the urban civilization on the subcontinent. It was centred on the Indus River and its tributaries, which is in present-day Pakistan. It is thought that a gradual deforestation caused by geological disturbances and climate change caused the fall of the civilization.

The civilization is famous for its cities that were built of brick, had a road-side drainage system and multi-storied houses.

All content from Kiddle encyclopedia articles (including the article images and facts) can be freely used under Attribution-ShareAlike license, unless stated otherwise. Cite this article:
History of Pakistan Facts for Kids. Kiddle Encyclopedia.