John Marshall (September 24, 1755 – July 6, 1835) was an American statesman and jurist who shaped American constitutional law and made the Supreme Court more powerful. Marshall was Chief Justice of the United States, working from February 4, 1801, until his death in 1835. He worked in the United States House of Representatives from March 4, 1799, to June 7, 1800, and, under President John Adams, was Secretary of State from June 6, 1800, to March 4, 1801. Marshall was from the Commonwealth of Virginia and a leader of the Federalist Party.

The longest working Chief Justice in Supreme Court history, Marshall ruled the Court for thirty years and was an important part of making the American legal system. His most important addition was judicial review; the power to stop laws that violate the Constitution. Marshall has been called the one that made the judicial branch special and powerful. Marshall also balanced the power between the federal and state government. He made sure the federal law was more powerful than state law and agreed with an expansive reading of the enumerated powers. 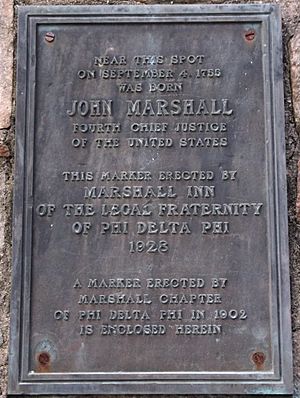 Soon after becoming Chief Justice, Marshall changed the manner in which the Supreme Court announced its decisions. Previously, each Justice would author a separate opinion (known as a seriatim opinion) as was done in the Virginia Supreme Court of his day and is still done today in the United Kingdom and Australia. Under Marshall, however, the Supreme Court adopted the practice of handing down a single opinion of the Court, allowing it to present a clear rule. As Marshall was almost always the author of this opinion, he essentially became the Court's sole spokesman in important cases. Marshall also got rid of the tradition that U.S. Supreme Court justices had inherited from the British of wearing ornate powdered wigs and red robes with ermine trim. 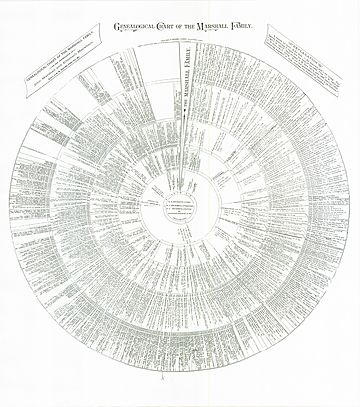 Marshall was a descendant of the Randolph family of Virginia, including William Randolph I and Thomas Randolph (of Tuckahoe). The family's genealogy was published in 1885.

In 1831, the 76-year-old chief justice traveled to Philadelphia, Pennsylvania, where he underwent an operation to remove bladder stones. That December, his wife Polly died in Richmond. In June 1835, Marshall again traveled to Philadelphia for medical treatment, where he died on July 6 at the age of 79, having served as Chief Justice for over 34 years. The Liberty Bell was rung following his death—a widespread story claims that this was when the bell cracked, never to be rung again.

His body was returned to Richmond and buried next to Polly's in Shockoe Hill Cemetery.

Marshall was among the last remaining Founding Fathers (a group poetically called the "Last of the Romans"), and was also the last surviving Cabinet member from the John Adams administration. In December 1835, President Andrew Jackson nominated Roger Taney to fill the vacancy for chief justice. 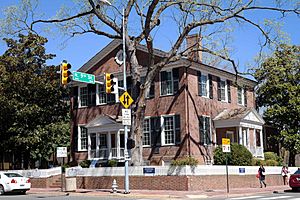 Marshall's home in Richmond, Virginia, has been preserved by Preservation Virginia (formerly known as the Association for the Preservation of Virginia Antiquities). It is considered to be an important landmark and museum, essential to an understanding of the Chief Justice's life and work. Additionally, his birthplace in Fauquier County, Virginia has been preserved as the John Marshall Birthplace Park.

An engraved portrait of Marshall appears on U.S. paper money on the series 1890 and 1891 treasury notes. These rare notes are in great demand by note collectors today. Also, in 1914, an engraved portrait of Marshall was used as the central vignette on series 1914 $500 federal reserve notes. These notes are also quite scarce. (William McKinley replaced Marshall on the $500 bill in 1928.) Example of both notes are available for viewing on the Federal Reserve Bank of San Francisco website. Marshall was also featured on a commemorative silver dollar in 2005. 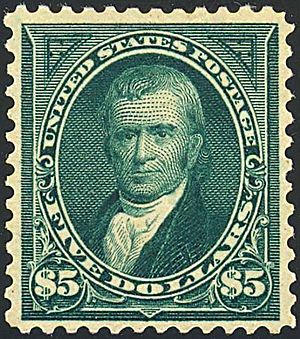 John Marshall was honored on a Postal Issue of 1894

Chief Justice John Marshall, a bronze statue of Marshall wearing his judicial robes stands on the ground floor inside the U.S. Supreme Court building. Unveiled in 1884, and initially placed on the west plaza of the U.S. Capitol, it was sculpted by William Wetmore Story. His father, Joseph Story, had served on the Supreme Court with Marshall. Another casting of the statue is located at the north end of John Marshall Park in Washington D.C. (the sculpture The Chess Players, commemorating Marshall's love for the game of chess, is located on the east side of the park), and a third is situated on the grounds of the Philadelphia Museum of Art. 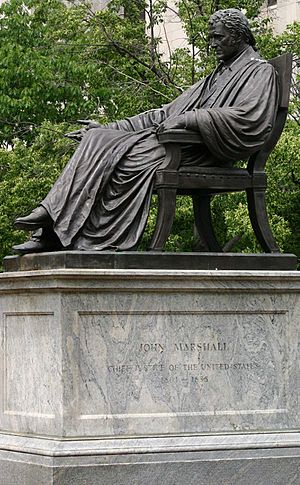 Virginia State Route 55, from Front Royal, Virginia, to Gainesville, Virginia, is named "John Marshall Highway" in Marshall's honor, as is the Unincorporated Town of Marshall, Virginia.

Initially a Reformed Church academy, Marshall College, named in honor of Chief Justice Marshall, officially opened in 1836 in Mercersburg, Pennsylvania. After a merger with Franklin College in 1853, the school was renamed Franklin and Marshall College, and located in Lancaster, Pennsylvania. Other law schools and colleges to bear his name include:

Numerous elementary, middle/junior high, and high schools around the nation have also been named for him.

All content from Kiddle encyclopedia articles (including the article images and facts) can be freely used under Attribution-ShareAlike license, unless stated otherwise. Cite this article:
John Marshall Facts for Kids. Kiddle Encyclopedia.