The College of William & Mary facts for kids

William & Mary educated U.S. Presidents Thomas Jefferson, James Monroe, and John Tyler as well as other key figures important to the development of the nation, including U.S. Supreme Court Chief Justice John Marshall, Speaker of the House Henry Clay and 16 signers of the Declaration of Independence. In 2008, the college had 5,850 undergraduate students and 2,042 graduate and professional students in and gave 1,454 bachelors, 440 masters, and 209 professional degrees. 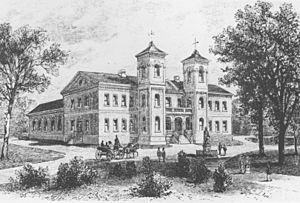