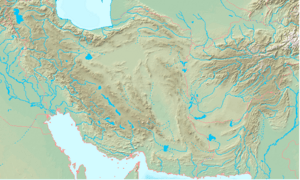 the plataeu of Iran, Afghanistan and Pakistan

The Iranian plateau, also known as the Persian plateau is a geological formation in Southwest Asia, Southern Asia and the Caucasus region. As a historical region, it includes Parthia, Media and eastern Persia, the heartlands of Greater Persia (mainly Iran, Afghanistan, and Pakistan west of the River Indus).

All content from Kiddle encyclopedia articles (including the article images and facts) can be freely used under Attribution-ShareAlike license, unless stated otherwise. Cite this article:
Iranian plateau Facts for Kids. Kiddle Encyclopedia.