She was one of the leaders of the Indian Rebellion of 1857 and became for Indian nationalists a symbol of resistance to the rule of the British East India Company in India.

Manikarnika was born into a Maratha family at Varanasi. She was married to Raja Gangadhar Rao, the Maharaja of Jhansi in 1842, and became the Rani of Jhansi. After her marriage Manikarnika became Lakshmibai, so named in honour of the goddess Lakshmi. Before her marriage, she was known as Chabeeli because of her jolly ways. In 1851, Rani Lakshmibai had a son, Damodar Rao. He died at the age of about four months. On the day before the raja's death in November 1853, she adopted a son. His name was Anand, but was renamed Damodar, after their actual son. The raja wrote a letter to the British government of India requesting that his widow should be recognised as the ruler of Jhansi after his death during her lifetime. After the death of her husband the head of the British government of India, Lord Dalhousie, refused to allow her adopted son to become raja and Jhansi was then ruled by the British.

After all the British in Jhansi had been killed by mutinous Indian troops in June 1857 the Rani took over the administration provisionally until the British returned. However she had to form an army to defeat the invading forces of Orchha and Datia and the British believed she had been responsible for the earlier British deaths. In March 1858, British forces led by Sir Hugh Rose came to Jhansi to take back the city from the Rani who now wanted independence. Jhansi was besieged and finally taken after strong resistance. Many of the people of the city were killed in the fighting and many more afterwards. The Rani escaped to Kalpi and jointly with the Maratha general Tantya Tope then seized Gwalior. In the battle of Kotah ki Serai in which the British forces commanded by Sir Hugh Rose conquered Gwalior, fought on 17 and 18 June 1858, she died. 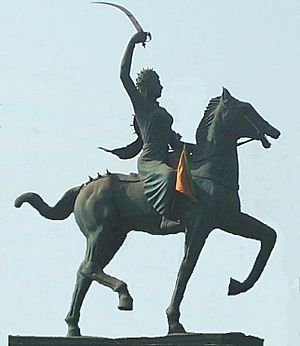 Statue of the Rani of Jhansi in Agra

All content from Kiddle encyclopedia articles (including the article images and facts) can be freely used under Attribution-ShareAlike license, unless stated otherwise. Cite this article:
Rani Lakshmibai Facts for Kids. Kiddle Encyclopedia.