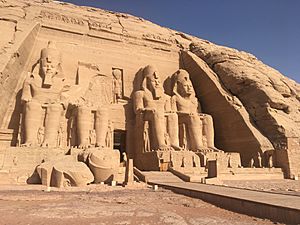 The Great Temple of Abu Simbel (ca. 1280 BCE), one of the earliest examples of rock-cut architecture.

Some rock-cut architecture, mostly for tombs, is excavated entirely in chambers under the surface of relatively level rock. If the excavation is instead made into the side of a cliff or steep slope, there can be an impressive facade, as found in Lycian tombs, Petra, Ajanta and elsewhere. The most laborious and impressive rock-cut architecture is the excavation of tall free-standing monolithic structures entirely below the surface level of the surrounding rock, in a large excavated hole around the structure. Ellora in India and Lalibela in Ethiopia (built by the Zagwe dynasty) provide the most spectacular and famous examples of such structures.

The Gommateshwara statue (Bahubali), the largest monolithic statue in the world, at Shravanabelagola, Karnataka, India, was built in 983 AD and was carved from a large single block of granite. In many parts of the world there are also rock reliefs, relief sculptures carved into rock faces, outside caves or at other sites. 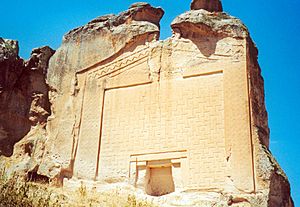 Ancient monuments of rock-cut architecture are widespread in several regions of world. Alteration of naturally formed caverns, although distinct from completely carved structures in the strict sense, date back to the neolithic period on several Mediterranean islands e.g. Malta (Hypogeum of Ħal-Saflieni), Sardinia (Anghelu Ruju, built between 3,000 and 1,500 BCE) and others.

Lycian tombs cut into the cliffs along the river in Dalyan, Turkey (4th century BCE).

Large-scale rock-cut structures were built in Ancient Egypt. Among these monuments was the Great Temple of Ramesses II, known as Abu Simbel, located along the Nile in Nubia, near the borders of Sudan about 300 kilometers from Aswan in Egypt. It dates from about the 19th Dynasty (ca. 1280 BCE), and consists of a monumentally scaled facade carved out of the cliff and a set of interior chambers that form its sanctuary.

In the 8th century, the Phrygians started some of the earliest rock-cut monuments, such as the Midas monument (700 BCE), dedicated to the famous Phrygian king Midas.

In the 5th century BCE, the Lycians, who inhabited southern Anatolia (now Turkey) built hundreds of rock-cut tombs of a similar type, but smaller in scale. Excellent examples are to be found near Dalyan, a town in Muğla Province, along the sheer cliffs that faces a river. Since these served as tombs rather than as religious sites, the interiors were usually small and unassuming. The ancient Etruscans of central Italy also left an important legacy of rock-cut architecture, mostly tombs, as those near the cities of Tarquinia and Vulci. 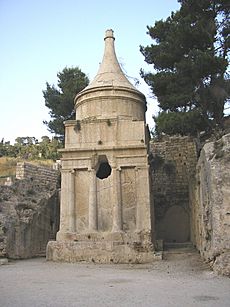 Tomb of Absalom (Kidron Valley), with rock-cut lower half

The creation of rock-cut tombs in ancient Israel began in the 8th-century BCE and continued through the Byzantine period. The Tomb of Absalom was constructed in the 1st century AD in the Kidron Valley of Jerusalem. 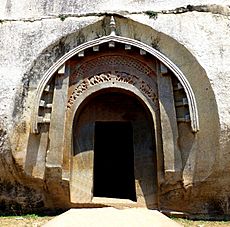 Lomas Rishi, one of the first rock-cut caves in India, 250 BCE.

Rock-cut architecture occupies a particularly important place in the history of Indian Architecture. The earliest instances of Indian rock-cut architecture, the Barabar caves, date from about the 3rd to the 2nd century BCE. They were built by the Buddhist monks and consisted mostly of multi-storey buildings carved into the mountain face to contain living and sleeping quarters, kitchens, and monastic spaces. Some of these monastic caves had shrines in them to the Buddha, bodhisattvas and saints. As time progressed, the interiors became more elaborate and systemitized; surfaces were often decorated with paintings, such as those at Ajanta. At the beginning of the 7th century Hindu rock-cut temples began to be constructed at Ellora. Unlike most previous examples of rock-cut architecture which consisted of a facade plus an interior, these temples were complete three-dimensional buildings created by carving away the hillside. They required several generations of planning and coordination to complete. Other major examples of rock-cut architecture in India are at Ajanta and Pataleshwar. 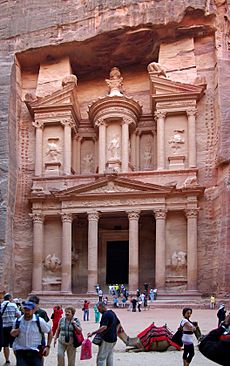 Al Khazneh or the Treasury at Petra.

The Nabataeans in their city of Petra, now in Jordan, extended the Western Asian tradition, carving their temples and tombs into the yellowish-orange rock that defines the canyons and gullies of the region. These structures, dating from 1st century BCE to about 2nd century CE, are particularly important in the history of architecture given their experimental forms. Here too, because the structures served as tombs, the interiors were rather perfunctory. In Petra one even finds a theater where the seats are cut out of the rock. 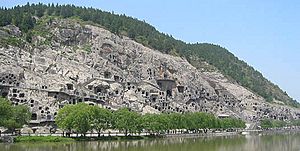 Mount Longmen as seen from Manshui Bridge to the southeast.

The technological skills associated with making these complex structures moved into China along the trade routes. The Longmen Grottoes, the Mogao Caves, and the Yungang Grottoes consist of hundreds of caves many with statues of Buddha in them. Most were built between 460–525 AD. There are extensive rock-cut buildings, including houses and churches in Cappadocia, Turkey. They were built over a span of hundreds of years prior to the 5th century CE. Emphasis here was more on the interiors than the exteriors. 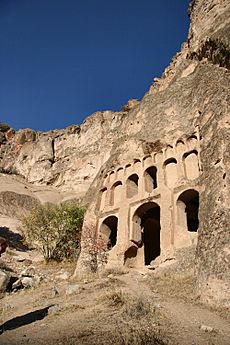 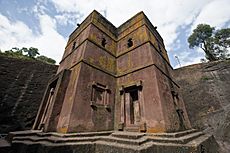 One of the 13 rock-hewn churches at Lalibela, Ethiopia, entirely cut out of the rock surface (c.1000 CE).

Another extensive site of rock-cut architecture is in Lalibela, a town in northern Ethiopia. The area contains numerous Orthodox churches in three dimensions, as at Ellora, that were carved out of the rock. These structures, which date from the 12th and 13th centuries CE and which are the last significant examples of this architectural form, ranks as among the most magnificent examples of rock-cut architecture in the world, with both interior and exterior brought to fruition.

Ancient rock cut tombs, temples and monasteries often have been adorned with frescoes and reliefs. The high resistance of natural cliff, skilled use of plaster and constant microclimate often have helped to preserve this art in better condition than in conventional buildings. Such exceptional examples are the ancient and early medieval frescoes in such locations as Bamyan Caves in Afghanistan with the most ancient known oil paintings in the world from 8th century AD, Ajanta Caves in India with well preserved tempera paintings from 2nd century BCE, Christian frescoes on Churches of Göreme, Turkey and numerous other monuments in Asia, Europe and Africa.

All content from Kiddle encyclopedia articles (including the article images and facts) can be freely used under Attribution-ShareAlike license, unless stated otherwise. Cite this article:
Rock-cut architecture Facts for Kids. Kiddle Encyclopedia.