Walnut Creek is a microclimate city in Contra Costa County, California, United States, located in the East Bay region of the San Francisco Bay Area, about 16 miles (26 km) east of the city of Oakland. With a total population of 70,127 per the 2020 census, Walnut Creek serves as a vibrant hub for its neighboring cities because of its location at the junction of the highways from Sacramento and San Jose (I-680) and San Francisco/Oakland (SR-24), and its accessibility by BART. Its active downtown neighborhood features hundred-year-old buildings and extensive high-end retail establishments. Walnut Creek has a median home sold price of $1,572,500 (excluding Rossmoor) with a highest home sold price of $4,120,500 as of March 2022. The city shares its borders with Lafayette, Alamo, Pleasant Hill, and Concord. 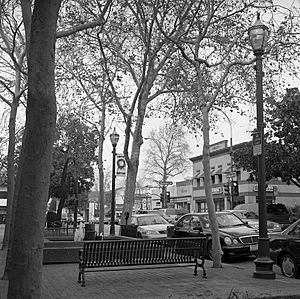 There are three bands of Bay Miwok Indians associated with early Walnut Creek: the Saclan, whose territory extended through the hills east of present-day Oakland, Rossmoor, Lafayette, Moraga, and Walnut Creek; the Volvon (also spelled Bolbon, Wolwon, and Zuicun) at Mt. Diablo; and the Tactan at Danville and Walnut Creek, on San Ramon Creek.

Today's Walnut Creek is located amidst the earlier site of four Mexican land grants. One of these land grants – measuring 18,000 acres (73 km2) – belonged to Juana Sanchez de Pacheco, who deeded it to her two grandsons. Ygnacio Sibrian, one of the grandsons, created the first roofed home in the valley in about 1850. The grant was called Rancho Arroyo de Las Nueces y Bolbones, named after the principal waterway, Arroyo de las Nueces (Walnut Creek) as well as for the local group of indigenous Americans (Bolbones). The Arroyo de las Nueces was named for the occurrence in the valley of the native species of walnut tree, the California Walnut.

With the coming of American settlers following the Mexican-American War, a small settlement called "The Corners" emerged, named because it was the place where roads from Pacheco and Lafayette met. The site of this first American settlement is found today at the intersection of Mt. Diablo Boulevard and North Main Street. The first town settler was William Slusher, who built a dwelling on the bank of Walnut Creek, which was called "Nuts Creek" by the Americans in 1849. In the year 1855, Milo Hough of Lafayette built the hotel named "Walnut Creek House" in the corners. A blacksmith shop and a store soon joined the hotel, and a year later, Hiram Penniman (who built Shadelands Ranch) laid out the town site and realigned the Main Street of today. Two decades later, the community changed its name from The Corners to Walnut Creek.

In December 1862 a United States Post Office was established, and the community was named "Walnut Creek". The downtown street patterns laid out in 1871–1872 by pioneer Homer Shuey on a portion of one of his family's large cattle ranches are still present today.

Walnut Creek began to grow with the arrival of Southern Pacific Railroad service in 1891. On October 21, 1914, the town and the surrounding area of 500 acres (2.0 square kilometres)), were incorporated as the 8th city in Contra Costa County. A branch line of the Southern Pacific railroad ran through Walnut Creek until the late 1970s. The East Bay Regional Park District's Iron Horse Trail, used by walkers, runners and bikers, runs over what were portions of that branch line. The mainline of the Sacramento Northern Railway passed through Walnut Creek. Both railroads had stations here. Today, the Pittsburg/Bay Point – SFO Line line of the Bay Area Rapid Transit (BART) serves Walnut Creek with a station adjacent to Highway 680.

With the 1951 opening of the downtown Broadway Shopping Center (now Broadway Plaza), Contra Costa County's first major retail center, the city took off in a new direction, and its population more than quadrupled – from 2,460 in 1950 to 9,903 in 1960. 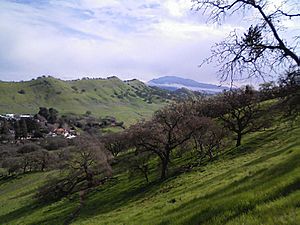 Walnut Creek's warm summer Mediterranean climate (Köppen climate classification Csb) is typical of California's interior valleys. In summer, high pressure is in control of the region, leading to almost unbroken sunshine and virtually no precipitation. Days start out cool but quickly warm up, with high temperatures normally in the 80s Fahrenheit (27 to 32 °C). Temperatures of 100 °F (38 °C) or hotter occur numerous times during heatwaves, however. In the winter, the jet stream moves far enough south so that Pacific storms can reach Walnut Creek, bringing much-needed rain – average annual rainfall approximates 20 inches (510 mm), with slight variations occurring in microclimates based on elevation and topography. During particularly cold storms, snow falls on the peak of nearby Mount Diablo, but snow in the valley floor is very rare. There are also plenty of clear, mild days in winter, often with morning frost. The climate allows for the successful cultivation of many plants and crops, being warm enough for citrus yet cold enough for apples. The Ruth Bancroft Garden is a renowned botanical garden that showcases the diversity of plants that can be successfully grown. 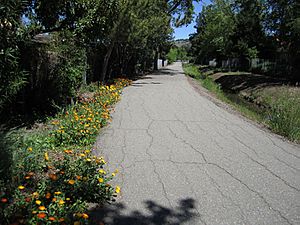 Walnut Creek is transected by the Iron Horse Trail (running north/south) through its downtown, as well as the Contra Costa Canal Trail (running east/west) at the north end of the city. Both these trails, in addition to city bike lanes, make bicycle transportation feasible for both recreation and an alternative commute. 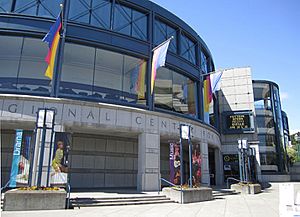 Lesher Center for the Arts 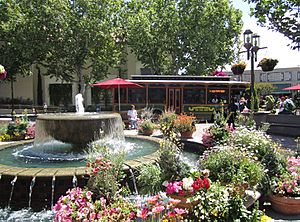 Bedford Gallery
This 3,500-square-foot exhibition space hosts several exhibitions annually, featuring historic and modern art from contemporary artists. The gallery is a community-based facility that provides art workshops, lectures, and educational programs to the public throughout the year.

Festival Opera
The Festival Opera Association was founded in Walnut Creek in 1991 to preserve and advance the operatic art form. The company produces a free Opera in the Park in Civic Park in addition to main stage performances at the Lesher Center for the Arts.

Lesher Center for the Arts
Three performance spaces (The Knight Stage 3, The Hoffman, and The Margaret Lesher theatres) and the Bedford Gallery are included in this modern building. The Center is named for Dean Lesher, newspaper publisher and founder of the Contra Costa Times. 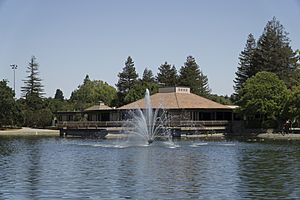 Walnut Creek has an active Sister Cities International program with two sister cities. Schools in the city have a yearly student-exchange with these cities.

Companies based in Walnut Creek include Central Garden & Pet (makers of the AvoDerm, Amdro, Kaytee brands, among others), American Reprographics Company, CSE Insurance Group, Maximum Games, and the PMI Group.

Walnut Creek is home to several private schools, including: 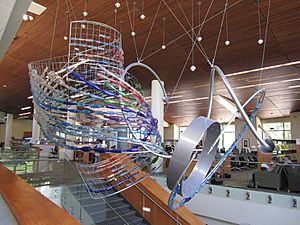 On February 26, 2008, the city demolished the Walnut Creek Library, that was built in 1961 at the southern end of Civic Park. Mayor Gwen Regalia hosted a groundbreaking on the same site for the new library on May 19, 2008. The new library, designed by Group 4 Architecture, Research + Planning, Inc., has 42,000 square feet (3,900 m2) and an underground parking garage. Construction was completed in 2010 and the library was officially opened on July 17, 2010.

All content from Kiddle encyclopedia articles (including the article images and facts) can be freely used under Attribution-ShareAlike license, unless stated otherwise. Cite this article:
Walnut Creek, California Facts for Kids. Kiddle Encyclopedia.