Kira Kazantsev (born July 20, 1991) is an American beauty pageant titleholder who won Miss America 2015 on September 14, 2014. She is the third consecutive Miss America winner from New York and had won the title of Miss New York on May 24, 2014 while serving as Miss City of New York.

Kazantsev was born in San Francisco, California, to Russian immigrants who left Moscow in 1990 for the United States, making her a first-generation American. Her father, George, is a general surgeon and her mother, Julia is a real-estate broker. She has one brother. Kazantsev is trilingual, being fluent in English, Russian, and Spanish. 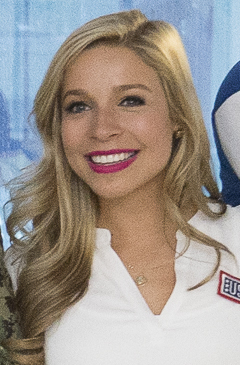 She graduated from Las Lomas High School in Walnut Creek, California and served as the student body president in 2009. She attended Hofstra University in Hempstead, New York with a triple major in political science, global studies, and geography. During junior year at Hofstra University, she studied abroad in Barcelona, Spain.

After graduating from Hofstra, Kazantsev applied to numerous law schools and was accepted to Notre Dame Law School and Fordham Law School. She stated in interviews, after being named Miss America 2015, her desire to specialize in international law upon receiving her law degree.

In the summer of 2017, Kazantsev attended the Stanford Graduate School of Business completing the Stanford Ignite entrepreneurship program, which teaches innovators to formulate, develop, and commercialize their ideas.

Kazantsev competed in the Miss New York 2013 pageant as Miss Cosmopolitan. She placed in the Top 10.

Kazantsev, representing New York, was one of the 52 delegates competing in the Miss America 2015 pageant held in Atlantic City, New Jersey in September 2014, she won the title. Her win made New York the first state to have a Miss America winner three years in a row. Apart from the title, Kira won a $50,000 scholarship to continue her education, which she planned to use towards law school. 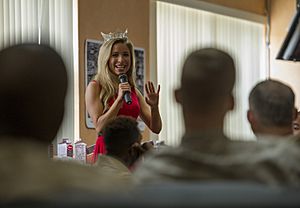 As Miss America, Kazantsev served as the official National Goodwill Ambassador for Children's Miracle Network Hospitals. Additionally, to further promote her platform of "Love Shouldn't Hurt", Kazantsev teamed up with Safe Horizon to launch the #PutTheNailinIt campaign with the aim to "end domestic violence for good." The campaign aims to spread awareness of domestic violence by painting your ring fingernail purple.

Kazantsev was also the first Miss America in 35 years to travel with the United Service Organizations (USO) and visit troops abroad.

She has had summer internships at a political consultancy in Washington, D.C., served as a volunteer for U.S. Senator Kirsten Gillibrand's 2012 re-election campaign, waited tables, interned at a local affiliate of Planned Parenthood, launched a food blog and served as a hostess.

In November 2017 Kazantsev launched a podcast called "What We Do," in which every week she talks with women about, "the tough issues, the challenges we’ve faced, the best moments, the funny moments and the not so great moments."

On September 4, 2018, Kazantsev announced her engagement to long-time boyfriend and Marine, Andrew Dixon.

All content from Kiddle encyclopedia articles (including the article images and facts) can be freely used under Attribution-ShareAlike license, unless stated otherwise. Cite this article:
Kira Kazantsev Facts for Kids. Kiddle Encyclopedia.